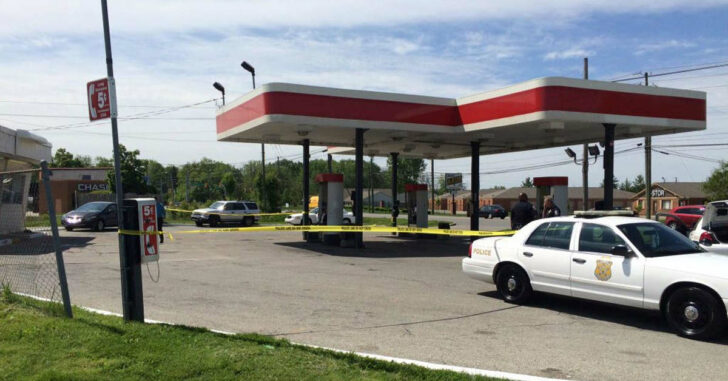 INDIANAPOLIS, INDIANA — A strong-arm robbery attempt was stopped dead in its tracks when the victim opened fire on the robber’s getaway vehicle, injuring a passenger.

Surveillance footage taken from the gas station is expected to play a pivotal role in determining how Indianapolis police will decide to prosecute but at this point, it appears that the getaway driver had exited his vehicle to assist the robber in shaking down a gas station customer.

As WTHR 13 reports, the customer exited the gas station store after making a purchase when he was accosted by a man attempting to rob him. The man used force against him but the victim fought back.

It was only when the robber’s accomplice attempted to intervene that the victim drew his concealed handgun and opened fire, striking a passenger.

The event left loyal patrons shaken as they feared the attack had originally been directed at a favored convenience store clerk. The clerk was unharmed and the gas station was closed for only a few hours before reopening.

The passenger of the getaway vehicle was taken to a local hospital by the driver, where they were both stopped for questioning by police.

This event has caused customers in this area to strongly reconsider their situational awareness.

“You hate to have this kind of stuff in your car, but I am legal. But if you look like you are going to stick your hand or gun in my window, you might get away with killing me, but I am going to get some DNA,” said a customer to a news reporter for WTHR.

It’s a new reality people are waking up to. Thugs, armed or not, aren’t afraid to hunt in packs and target people when they’re most vulnerable. The daily routine of stopping in a place, picking up a drink or a snack, and heading out has now become a routine choke point for assaults and robberies.

Gas stations have always been high violence locations because of their proximity to the road and variable volume of traffic. This means we have to be vigilant and especially around all those gas pumps. Criminals rarely seem to think ahead when it comes to exchanging fire in a gas station — as we’ve seen with recent attacks.

Preparedness, proper training, and good situational awareness can all give us just that couple of microseconds we need to take the initiative out of the hands of the bad guys. That’s a responsibility to train, be responsible, and carry everyday.