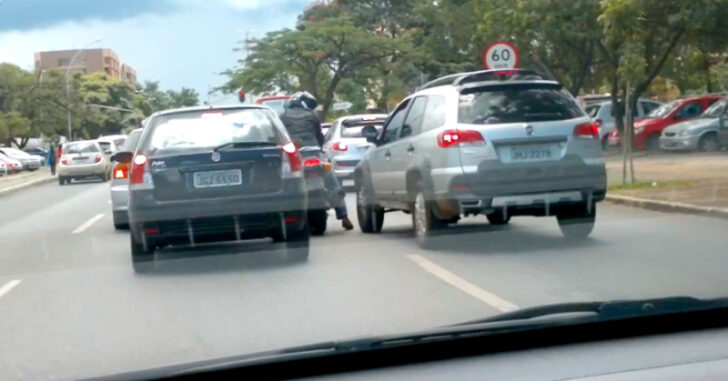 NEWINGTON, CONNECTICUT — What’s to be done when you’re stuck in tight traffic and suddenly a man decides to start cussing you out? Initially, nothing. But when that man brought out a chainsaw, one concealed carrier motorist decided enough was enough.

According to Newington Police, Michael Salafia, 30, got out of his vehicle with chainsaw in hand and began approaching another motorist shouting racial slurs and brandishing the chainsaw. The motorist took out his handgun to let Salafia know that he would protect himself. Salafia saw the gun, realized chainsaw does not trump handgun, and got back into his car — but not before allegedly cutting himself with his own chainsaw and spilling his own blood on the motorist’s vehicle.

Police arrived and once they assessed the situation and checked the motorist’s permit, decided that Salafia was clearly in the wrong and arrested him on charges of second-degree breach of peace, second-degree threatening and intimidation based on bigotry or bias. That’s two felonies that will be hard to expunge from the record.

We’re seeing a lot of motorists having to deal with people who can’t keep their cool while on the road. Recently, that’s even included one elderly couple having to defend themselves from another concealed carrier.*

*Post note from that previous story: that man is no longer licensed to carry a concealed firearm. Those are some of the very real consequences of brandishing a firearm at another person.

The roads can be quite hazardous and it’s hard to de-escalate road rage situations. Ultimately, this concealed carrier showed restraint and the ability to see that the man approaching him was definitely a threat to himself and his property. Unfortunately, we don’t have any good recipes for getting the blood of your attacker off your car but if it’s any consolation, we’re pretty sure Salafia is regretting his decision more and more as charges are filed and pending.

Previous article: #DIGTHERIG - Garry and his Beretta Nano in an Alien Gear Holster Next article: Woman Shoots Husband In Self-Defense