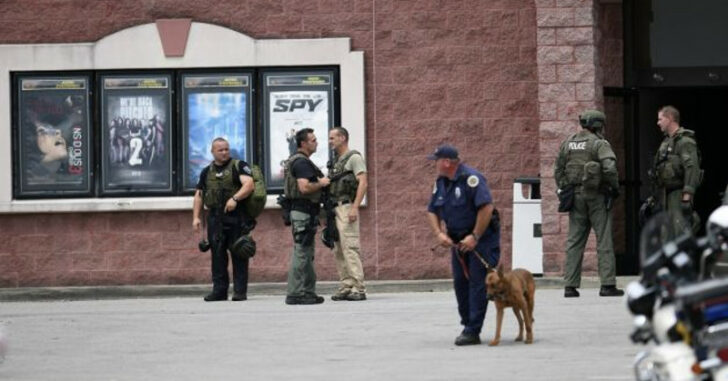 ANTIOCH, TENNESSEE — Authorities are saying a 29 year old man attacked a theater showing of “Mad Max: Fury Road”.  Wearing a surgical mask and wielding both a gun and a hatchet, he let loose a torrent of pepper spray on the audience of eight.  Metro police were fast to respond, with an officer on the scene exchanging rounds with the attacker before he fled out the back and ran straight into SWAT.

According to Fairfield Citizen, there was a 10 second exchange of gunfire prior to SWAT shooting him dead.  One of the theater attendees reported that he had been cut by the assailant’s hatchet but other than that – no injuries were reported.

“The only thing that I would like to say is that I’m eternally grateful to the Metro Police Department for their fast response today, and the fact that no one else got injured other than the person who did this,” one of the victims said.

“And I would also like to thank all the citizens who gathered around us, helped my daughter when we were pepper sprayed. That kind of gives me a little bit more faith in humanity again.”

Steven added that he had “no idea why this gentleman decided to attack us.”

Metro police reaction was measured in 2 minutes from receiving the first call at 1:33 pm.  From start to finish, the event took less than an hour.

Let’s all take a moment and be extremely thankful no one was gravely injured or hurt.  And then let’s take a moment to thank the Metro police for their fast response time.

According to the Fairfield Citizen, the assailant engaged SWAT at close range and was killed instantly.  Authorities have still not recovered his firearm.  According to the watchdog group, 2nd Amendment Check, Carmike Cinemas are “weapon free” except for law enforcement and security personnel.