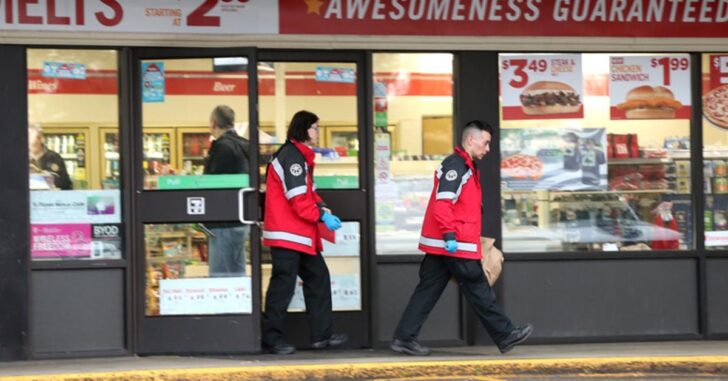 BURIEN, WASHINGTON — A masked hatchet-wielding man wreaking havoc in a Washington 7-11 was shot and killed this morning by a good Samaritan with a concealed firearm.

Though the motive is unclear, the as-yet unidentified suspect entered the store shortly before 5:45 am and, without saying a word, immediately started swinging the hatchet. He first attacked a customer before turning his sights on the clerk, who suffered only minor injuries to his stomach before a good Samaritan stepped in.

The 60-year-old morning regular was seated in the store drinking his coffee when the attacker came in. Responding immediately, the unnamed man pulled out his firearm and shot the assailant, who died at the scene.

King County Sheriff Sergeant Cindi West, called the man a hero, saying, “Fortunately, because of this customer with his weapon, this could have been a lot worse… we believe had this good Samaritan not acted, we might have a dead clerk on our hands right now. The clerk could be the one laying there dead on the floor right now.”

Investigators describe the areas as a “quite neighborhood,” saying this is the “first violent incident at the store in recent memory.”

Though the need to be prepared to defend yourself couldn’t be more obvious in some areas (think Chicago, New York City, Detroit, et al.), the importance of remaining vigilant, even in “quiet neighborhoods,” cannot be overstated.

Every quite area… every nice neighborhood… every quaint little town… has the potential to see its first violent crime. If you live there, through proper training and preparation, you can decide not to be its first victim.

I know a lot of concealed carry licensees who only carry when they’re headed to an unfamiliar or known dangerous area. Had the good Samaritan in this story had that same mindset, things would almost certainly turned out much worse.

If you’re licensed to carry a concealed firearm, make sure you have, not only the license to carry it, but also the training to use it should you need to. And make it a habit to carry it every single day, no matter where you’re going.

Previous article: #DIGTHERIG - Bob and his Kahr CM9 Next article: [VIDEO] People Tell It Like It Is After Police Chief Refuses To Issue Concealed Carry Permits