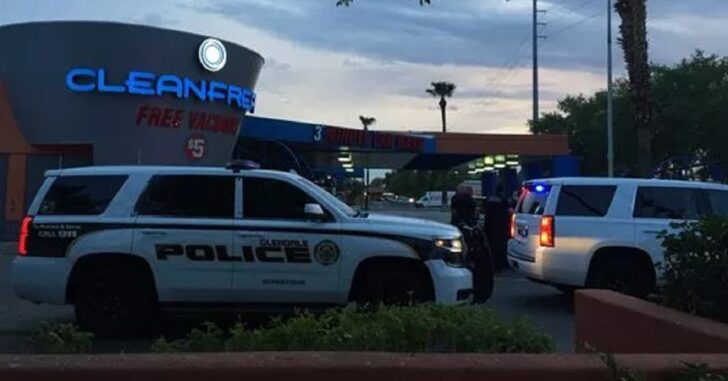 GLENDALE, AZ —  A woman was put in the hospital after a road rage incident turned into a shooting, AZ Central reports.

One woman was found at the scene of the crime with a single gunshot wound — she was taken to the hospital. The shooter, also a woman, was detained by police.

A woman may die because someone was mad about how someone else drove. It’s insanity.

I was once a victim of some serious road rage. And I’m not talking about grandma yelling at me as she passes by because she doesn’t think I’m moving fast enough — I’m talking real-life car chase.

And, of course, because I was 19 at the time, I wasn’t carrying. I haven’t had the chance to share this story yet so…

Like so many other 19-year-old who came before me, I was a pizza delivery boy.  A pretty decent one, too.  However, one evening a fellow driver disagreed, pretty violently.

To this day I don’t know why he got mad. It was a whirl area, and there really wasn’t anything I could do to mess up his day, if I wanted to. It was safe to pass one another, there were no turns that I did not signal. He just was really angry.

And who gets the brunt of that? Service staff, apparently, even if you don’t know that they are service staff.  The man followed me as I made a delivery about 8 miles from the store in which I was working. As soon as I got off of the main road, he came within about 3 feet of my back fender and kicked on his highbeams.

Not only was I confused, but I was mostly blinded. I slowed the vehicle, and prepared to pull off of the road so that he could pass.

But he slowed down with me.

So I picked up back to speed limit, and he managed. I made a quick turn to verify whether he was really following me — anyone who’s ever driven knows that there are some drivers that are just plain odd.

He turned with me.  More than that, he tried to force my vehicle into a dead-end and block the exit.

OK, time to call the police.

So, here I am, 19 and trying to escape some crazed motorist and talk to a police dispatcher at once.

I made it out of that incident OK-fortunately for me, the law enforcement officer was nearby. However, that story just goes to show that sometimes, it has nothing to do with your emotions on the road. Like, at all. Sometimes it is all the  other guy.

So be prepared. There is no harm in apologizing  two and enraged individual if it means that both of you get to come down and go home that night. Always work to de-escalate road rage situations. They just aren’t worth it.

Previous article: Homeowner Holds Burglar At Gunpoint For Free Ride To Jail Next article: A Rare Look Into My Gun Safe & How I Added Space with a Magnetic Gun Mount