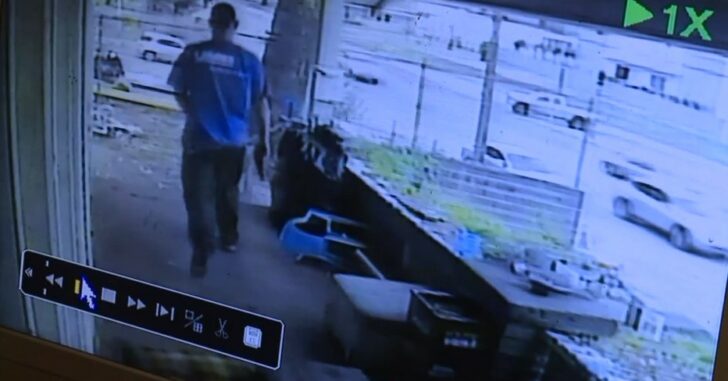 In Kansas City, Missouri, last Saturday, a kind-hearted stranger saved a woman from a violent attack and may have saved her three kids, too.

The Good Samaritan, Benjamin Seadorf, was with his own four children at home when he suddenly heard a woman’s “blood-curdling scream.”“She definitely was in fear of her life,” Seadorf recalled. “She was screaming at the top of her lungs, profusely bawling. She just kept screaming, ‘Help me! Help! Somebody, please help me!’ over and over again.”

That was all Seadorf needed to hear. He ran out the door with his legally possessed 9mm handgun and went in the direction of the screams. The view of what happened is blocked by a car in the video, but according to the police report, Seadorf approached a parked car and found Alarick Williams violently grabbing the mother of his three children, beating her unconscious and shoving her forcefully into a car. Their kids were all in the car while this was happening. Allegedly, this all started because the woman had asked Williams to drop her off at her cousin’s place.

“As I get close to the vehicle, I noticed her top’s ripped off,” Seadorf said to reporters. “Her bra’s halfway off, and her pants were halfway off because he kept grabbing her.”

Seadorf walked up to the car and told Williams to get out of the vehicle and on the ground. Williams put the car in park and complied, giving the police time to arrive and arrest Williams, who is now being charged with two counts of domestic assault. The officers also thanked Seadorf for what he did.

For his part, Seadorf seems shocked that no one else in the area attempted to intervene. He feels that what he did was a fulfillment of moral obligation, not something that should be extraordinary.

“Society doesn’t want to get involved now days, and it’s sad,” Seadorf remarked. “We need to help each other more.”

No charges are being filed against Seadorf for using the threat of lethal force to stop this violent act.