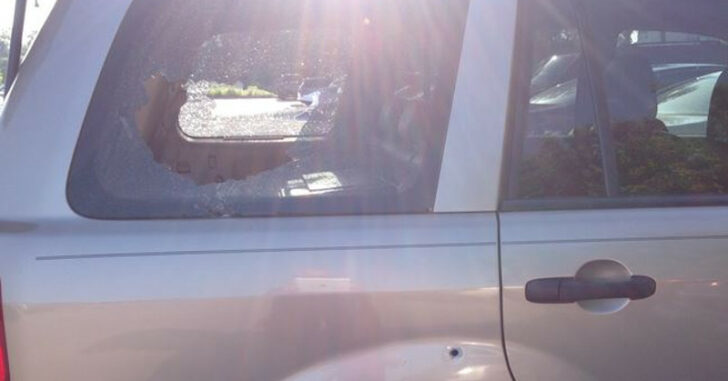 CARLISLE, PENNSYLVANIA — When a guy left his car running in a parking lot, an enterprising criminal thought it was an excellent opportunity to make a quick buck.  That’s when things got out of hand, according to Carlisle police.

The victim, who also had a firearm on him, saw his car driving off without him and opened fire on the vehicle.  This resulted in a call to police about a possible carjacking with shots fired.  They, obviously, responded to the level of threat they were called to address.  Unfortunately for the victim, the police saw his actions as reckless endangerment, according to Penn Live, and have charged him with reckless endangerment and discharging his firearm in public.  Those are both charges he’ll have to face in court, driving in his recovered vehicle with bullet holes he put into it.  The carjacker, realizing the police were hot on the case, pulled over a couple blocks away and surrendered without incident.  He’ll be charged with his crime.  Who knows, maybe the two will get to see each other in the same prison?

In all seriousness, folks, as frustrating as it is to have property stolen — endangering the public in its recovery is never called for.  This wasn’t a case of exchanged gunfire or defensive gun use.  It was just plain dumb on behalf of the gun owner.  We’re not calling the gun owner dumb, per se, but we are definitely saying that improper judgement was used in handling the situation.

It’s also a reminder that it’s never a good idea to leave a car running if you’re not already in it.  That’s just asking to have your car robbed.  As a resident of a city in the Northeast, I see people leave their cars running all the time because they’re either warming their car up for work in the morning or, conversely, just jumping out to pick up something from the local 7-11.  Both of these habits are habits made with the poor assumption that bystanders aren’t bad people who will steal your car.  And for those Americans who get their car stolen in this manner — that’s a correction that happens once.

Here’s the basic rules: when a criminal isn’t visibly armed and is fleeing a situation, you’re usually obliged not to open fire.  Even as I type these words, I remember during the first Persian Gulf war where a U.S. tank column was approaching an Iraqi tank and the Iraqi tank rotated his turret 180 degrees to show the crew was “surrendering”.  As the tanks got closer, they realized they were walking themselves into a trap and the Iraqi tank turned its turret around once the M-1 Abrams got within range.  Poor choice for a way to violate the Geneva Conventions and certainly a poor choice when facing better armored, trained, and equipped tank crews.  Needless to say, I don’t think that Iraqi tank was ever recovered.  But the same, strangely, holds true for concealed carriers.  We’re unfortunately placed under the necessity of acknowledging and honoring surrender and flight.  This is doubly true when we’re out in public and there are bystanders and other people who may suffer if an exchange of gunfire does occur.  This is ALSO why training and good judgement are so pivotal.