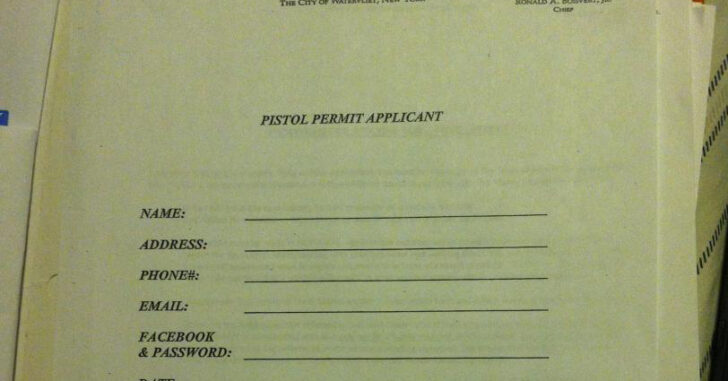 No, that headline is not a joke. Shortly after this information was released on a forum, the editor of TTAG, Robert Farago, contacted the police chief to try and get this side of the story.

The origins of this story can be traced back to the NYFirearms.com forum, posted by member mazz.

First off, Watervliet is a mere 10 miles from us. NY is notorious for making it difficult to obtain a pistol permit, and it seems that some jurisdictions are making up their own rules and forgetting about a person’s personal privacy.

The Chief answered the phone for TTAG, and his name is Chief Ron Boisvert. He first said that the sheet should not have been a part of the packet and that it’s purpose is “for internal use only”.

As it turns out, the Chief asks pistol permit applicants to login to their Facebook pages during their interview. Yea, NY likes to interview. Anyway, the Chief goes on to say just what they’re looking for; “Pages they’re looked at, friends – anything that reflects on the character of the applicant.”.

When Farago pointed out that what he is doing is unconstitutional and unnecessary, his response was rather simple, stating “It is what it is.” If a person declines to provide the information to login, or declines to login during the interview, the Chief says that he makes a note of this on the application. Then, it’s up to the judge.

In NY, once your application goes down to a judge, it’s the luck of the draw. If your application happens to land on the desk of a judge who dislikes firearms, good luck getting your permit.

For example, I know of a situation where a father and son were treated differently… to the extreme. The son had his pistol permit for 6 months when he asked for his restrictions to be removed. No problem; his judge took them right off. Then, the father tried the same thing. He has had his permit for almost 40 years, but was denied his request for the removal of his restrictions by his judge.

It doesn’t make an ounce of sense, and it probably never will.

Either way, I lost my Facebook in a boating accident last summer.