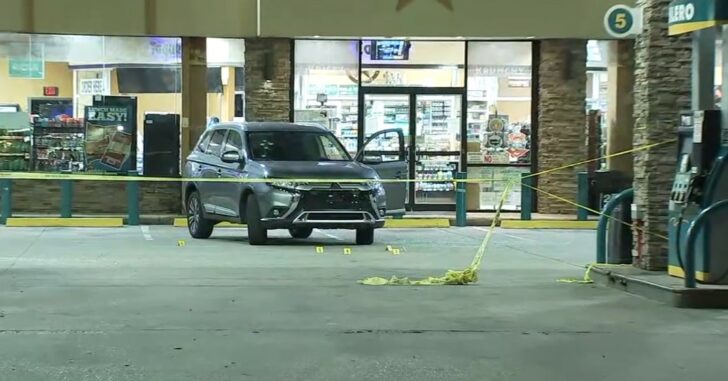 HOUSTON, TEXAS — A suspect is in critical condition after attempting to carjack a vehicle that was parked at a gas pump. At the time of the attempt, a woman was inside the vehicle and a man was outside pumping gas.

Investigators say a male suspect in a black Ford F-150 was apparently involved in some kind of accident on the freeway, and pulled into the Valero.

At that same time, HPD says a couple was at one of the gas pumps; a woman was inside a silver SUV and a man was outside pumping gas.

That’s when the driver of the Ford F-150 attempted to carjack the silver SUV with the woman inside, investigators say.

According to police, the suspect jumped into the driver’s seat and tried to take off.

That’s when the man pumping gas pulled out his gun and fired several shots at the suspect.

After the shots were fired, the suspect got back out of the vehicle and started to run, but the damage had already been done. He collapsed behind the gas station where police found him, and he was transported to the hospital.

The couple were not injured during the incident.

I am not sure where the woman was situated inside the vehicle, but we do see multiple bullet holes in the windshield on the passenger side of the vehicle. Assuming they came from the armed man who was pumping gas, they could have been close to the woman inside.

Luckily, she was not injured and the good guy and gal prevailed in this incident.