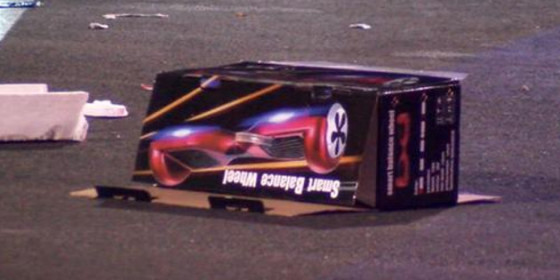 BELLFLOWER, CALIFORNIA — A man arranged to meet another in the parking lot of a mall to sell two hoverboards.  According to KABC, when the two parties arrived and began their transaction, another man appeared behind him and pistol-whipped him in the back of the head.  Normally, in California, the game would be over because we all know California’s stance on lawful concealed carry.  However, this is one of the rare instances where the victim was an off-duty security guard.  That means he likely had a legal license to carry concealed and he was armed — smart move.  He pulled out his gun and opened fire on both would-be robbers.  He struck one of them.  That helped deputies track down one of the robbers and he’s presently in custody.  He was identified as 18-year-old Semaj James.  So, we can rule out lawful gun owner or someone licensed to carry in California.  We can also rule out criminal mastermind but that’s another issue entirely.

While the criminal-in-custody is getting arraigned, let’s go ahead and point out that a lot of us are probably going to conduct private sales this Christmas season.  Sometimes we’re looking for a special gift for that special someone or we’re just looking to get rid of old junk.  We’ve covered stories in which craigslist meet-ups turned sour and fast.

Obviously, the guy in this story tried to show up in a well-lit public area.  So, that’s step one.  Let’s quickly go over a few other things we can do to keep private sales and transactions safe.

Sometimes it’s inconvenient, but it’s never a bad idea.  Another set of eyes and ears alone could prove important.

Step 2: Meet In A Public Place

Police stations have been setting up monitored spots for people to show up and safely conduct their transactions.  While the idea of that may turn you off, there is definitely no thug dumb enough to try to push an armed robbery right outside a police station.  But we’re not going to trust that seemingly logical thought because we…

Carrying concealed means you have the ability to react, at least, if things go bad.  Not everyone you meet is some heinous lunatic looking to do you harm for a fast buck.  I don’t believe that and I think the majority of concealed carriers don’t, either.  Carrying concealed to a private sale is just an added measure of security.

Be safe this holiday season and carry everyday.