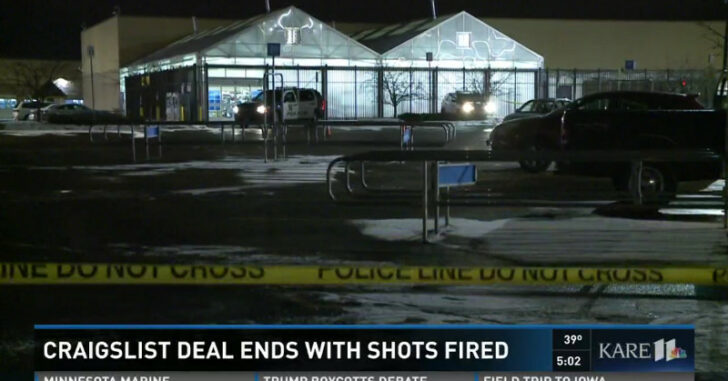 SHAKOPEE, MINNESOTA — The victim of a recent craigslist deal gone bad thought he did everything right: he agreed to meet in a public place and came prepared with his concealed carry handgun.  Both of these factors, even though the deal went awry, paid off in spades when an alleged robber grabbed the smartphone the victim was looking to sell and ran.  The victim pursued but did not draw his gun until the robber turned around and drew his own handgun.  According to Shakopee Police Chief Jeff Tate, the robber opened fire on the victim.  The victim also happened to have his own handgun and took cover.

“The victim fled, kind of zig-zagged through the lot,” Tate said. “The victim has a conceal carry permit and he was carrying at the time. Once he got cover, he pulled his gun out and fired multiple rounds at the suspect.”

The armed robber hopped in the car with an accomplice and attempted to flee the scene.  The concealed carrier called 911 and waited for police to arrive.  Shakopee police arrived, investigated the scene, and placed Walmart under a precautionary lockdown for about thirty minutes so they could assess the situation.  The concealed carrier was not charged with any crimes and, in a weird sort of fortune, both the robber and his accomplice were caught around 3:30 pm.

Shakopee police took the moment to remind others in the area that there is a designated spot for craigslist exchanges out front of the police station.  It’s monitored and there are police nearby.

“This is exactly why we’ve encouraged this program,” Tate said. “I think there’s a big message here for everybody — if you’re going to do these types of transactions, do them in a police department. Period.”

As concealed carriers, I thought it was awesome to see someone actually taking cover versus just running out into a hail of poorly aimed rounds.  This is the part that I keep reiterating: take cover.  Let the other guy be an idiot and run crazy through the cars.  Get a description, report it to police, let them follow up.  We have a right to defend ourselves and to try to protect our property, but at some point we have to prioritize our own survival and also acknowledge that there are other people who are at risk in an exchange of gunfire.  The concealed carrier didn’t hit the robber with his return fire — which is completely normal in a gunfight.  Another thing concealed carriers are oft remiss to ignore is that in an actual gunfight where you and your assailant are both moving around obstacles, your chances of getting a round on target are not all that good.  Settling down into cover and placing a judicious shot is something that requires training, patience, and good judgement.

Needless to say, good job to the concealed carrier for acting in good form and our sincere apologies to the loss of his property.  Hopefully, he’ll get it back after those two crooks get sentenced.