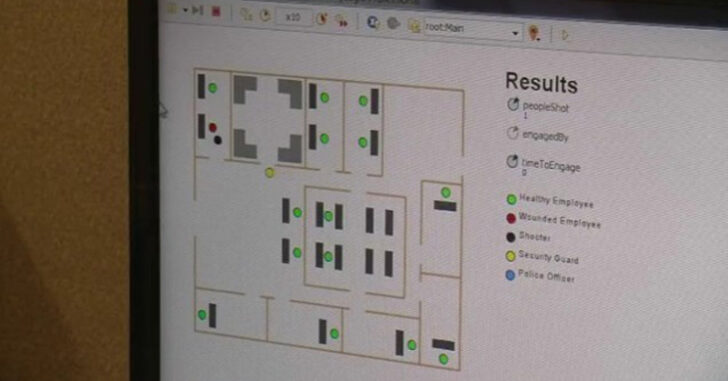 The Purdue Homeland Security Institute has developed simulation technology to determine what the best course of action is when dealing with an active shooter situation.

For the last five years, Adam Kirby has been working on this technology and sat in horror as he watched the events unfold in Paris last week. He noted that as he was watching TV, he had a strong feeling that more people were being killed and that they couldn’t do much to save themselves.

During the attack at the concert hall, for example, it took police a full 140 minutes to act. Granted the situation was extremely difficult and had to be approached with caution, it doesn’t negate the fact that an incredible amount of time lapsed before action was ultimately taken.

“My research has shown that in a typical shooting situation, one person is shot roughly every 20 seconds,” explained Kirby. “And in 140 minutes, that leaves a lot of room for a lot of people to get shot.”

With the simulation technology, Kirby can adjust factors such as police response time, the probability of concealed carriers being in the mix, and whether or not armed security would be at the location.

The conclusion is that if more individuals are armed, who find themselves in a situation like this, then less casualties can be expected. It is noted that the same holds true for faster police response times and the addition of security guards.

The ultimate takeaway of this seems to be this: when firearms are added to the equation, whether they are added by police or armed citizens, casualties would likely be decreased.

And given the fact that any armed citizen would likely be the first to respond –since they’re already at the location– the best conclusion in my eyes is to have more armed citizens who know how to use their firearms.

Kirby plans to use the technology to run a simulation for the recent attacks in Paris once all the variables are determined.

“Once this is all settled down, we can actually look at the numbers, and learn from what happened,” said Kirby “And hopefully try and make some policy decisions, which is what we are trying to do with our research here at the Purdue Homeland Security Institute.”

Previous article: Terrorists In Paris May Have Met Armed Resistance During Attacks, But Not From Law-Abiding Citizens Next article: A New Way To Store Your Firearm While You Sleep