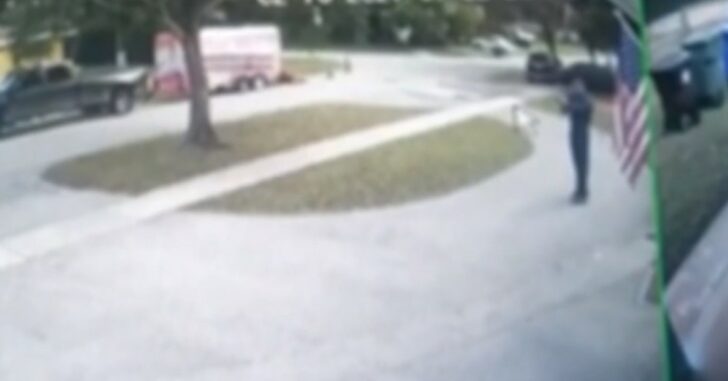 FORT LAUDERDALE, FLORIDA — An armed homeowner shot at two men after one of them attempted to steal a pressure washer from his carport. The incident was captured on home surveillance video.

The suspects approached the home and then split up, one walking down the street and the other entering the carport of their target home. He picks an expensive pressure washer as his item to steal and begins to leave with it. That’s when the homeowner confronts him with a gun.

In the surveillance footage, the property owner is seen confronting the intruder and pointing a gun.

He said he didn’t know if the other two were armed and he fired his weapon.

One of the suspects was struck by the homeowner and went to a nearby car dealership for help. Employees at the dealership helped the suspect and called police. He was taken to the hospital for treatment, and was also arrested.

The second suspect is still on the loose.

These stories pop up from time to time, and it’s a tough spot to be in as a person who teaches and promotes responsible gun ownership. The reason? I have a hard time seeing an armed citizen firing at a fleeing suspect, because any number of bad outcomes can occur.

Property can be replaced, but if you happen to miss and hit an innocent bystander, your life is going to change forever.

Luckily that didn’t happen in this case, but even if the laws of your state allow the use of deadly force to defend property, make damn sure you’re aware of the risks if you make the decision to pull that trigger.