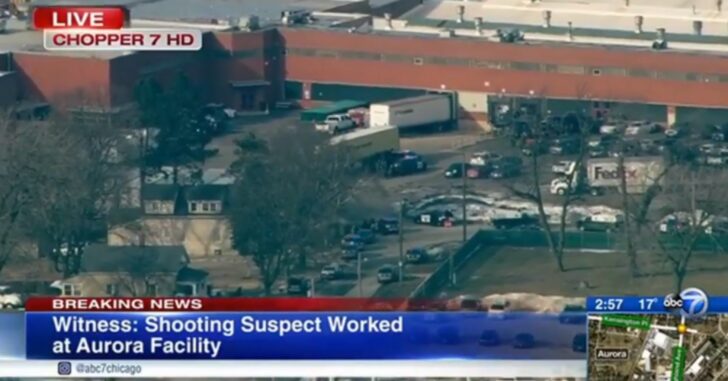 4 police officers were injured during the incident and all are stable.

Police say the suspect has been ‘neutralized’, but will not yet say if he survived.

“What I saw a guy running down the aisle with a pistol with a laser on it,” John Probst said on WLS-TV, a Chicago TV station.

Probst told the anchor that he recognized the shooter, a coworker of his. “He was shooting everybody,” he said.

The gunman is said to be in custody. There is no word on his condition, or the condition of any victims.

An active scene is happening right now in Aurora, Illinois, and witnesses are reporting that the gunman is an employee of the company, which is described as a manufacturing facility.

Four police are said to be injured, as well as multiple civilians.

Reports of 6 shot at Henry Pratt. Plant being evacuated. US Marshalls on the ground. Shooter at large. Shots still being fired.

Information is scarce at the moment. We will update this space when more information becomes available.

Previous article: #DIGTHERIG - Bo and his Glock 43 in a DeSantis Holster (Temporarily) Next article: UPDATE: 5 Civilians Killed, 5 Police Injured In Mass Shooting At A Manufacturing Plant In Illinois