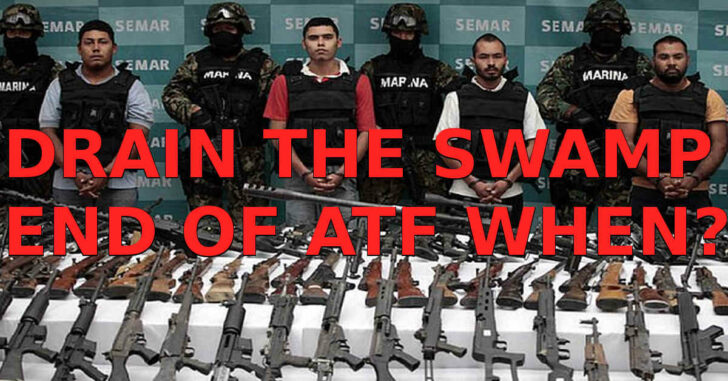 WASHINGTON, D.C. — Remember when the ATF was linked to hundreds of missing firearms placed into the hands of Mexican cartels? We do. It wasn’t long ago that news broke about the ATF’s gun smuggling operations to drug cartels linked with countless extrajudicial murders, killings, and kidnappings across North America.

Fun Fact: one of the guns seized at a “El Chapo” Guzman hideout was linked to the inventory of firearms released by the ATF in Operation Fast and Furious.

But the ATF still has the authority to walk into any Federal Firearm License holder’s store or home and seize any firearms.

You still have to wait anywhere between two and eleven months to pick up the suppressor after you paid a $200 tax stamp to the ATF.

I was naturally wary of any sort of rhetoric spewed on the campaign trail. When Donald Trump said he would “drain the swamps”, I really didn’t know what that would actually mean. Entrenched politics and federal spending ARE out of control. But where do you start cutting the strings?

As it turns out, one place is none other than the Bureau of Alcohol, Tobacco, and Firearms. The BATF has been the boogeyman in the firearms community for the past eight years. Every time President Obama would raise the specter of sweeping gun control measures, the ATF was naturally the muscle the government would rely on.

Congressman Jim Sensenbrenner seems to think it’s time to eliminate them altogether. On January 12, he reintroduced the ATF Elimination Act of 2017.

“Despite our country being trillions of dollars in debt, government spending continues to rise. Common sense budgeting solutions are necessary, and the ATF Elimination Act is one measure we can take to reduce spending, redundancy, and practice responsible governance. The ATF is a scandal-ridden, largely duplicative agency that has been branded by failure and lacks a clear mission. It is plagued by backlogs, funding gaps, hiring challenges, and a lack of leadership. These facts make it a logical place to begin draining the swamp and acting in the best interest of the American taxpayer.”

Now, the key word is “reintroduce”. The ATF Elimination Act has been tried before. And, unfortunately, it didn’t work out so well.

This time, maybe it has a chance of making it past the House and into the Senate. In 2015, it petered out somewhere in a subcommittee.

The best way for you, the law-abiding gun owner, to see this make it to the floor is to contact your House Representative and demand action on the ATF Elimination Act of 2017.

There are multiple existing enforcement agencies — from the FBI to local law enforcement — that could easily handle the ATF’s current workload. This wouldn’t result in ATF employees losing their job but it would phase out the institution. Current employees would phase out with retirement or be reassigned to other federal institutions where they could take their respective expertise.

Will it happen, folks? I don’t know. Current year is looking pretty promising.