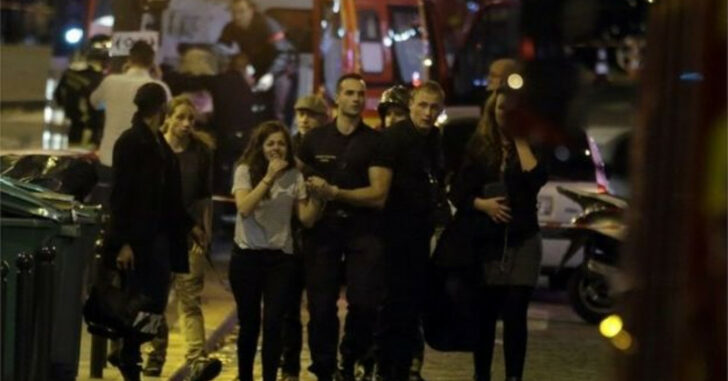 PARIS, FRANCE — Estimates are still rolling in on the death toll for a series of coordinated attacks perpetuated by a yet unnamed group which has affected the lives of millions across France and across the world.  The BBC is placing the figure of lives lost at 120 souls while AP places it closer to 158, forcing the French government to declare a state of emergency and deploy 1,500 soldiers across the city.

The first warning that this attack may have been eminent came from a French-speaking forum.  The forum poster, Encore1Ban, wrote the following on September 26, 2014: There will be a series of attacks starting from this famous date.  Be careful of ALL vehicles, like planes, trains, metro,… And public places I have my sources Enjoy.

Dismissed at the time, it later is speculated that the date in question was none other than Friday the 13th, 2015 — indicating a level of meticulous planning not before seen in prior Paris attacks.  Earlier this year, two terrorists carried out a brazen assault on the headquarters of the Charlie Hebdo publication that drew international attention to the turmoil in that city.  And in August, another attack was attempted on a French train but was stopped by three Americans.

This attack… This series of attacks is something else entirely. As the people of Paris pick up the pieces and try to understand the madness that lead to these vicious killings, we here at Concealed Nation want to take a moment in silence to appreciate the efforts of those in French law enforcement and military who bravely rushed in to try to save lives.  And we’ll be taking another moment to mourn the dead and pray for the lives of those they left behind.

Today, we stand with France in this tragedy.