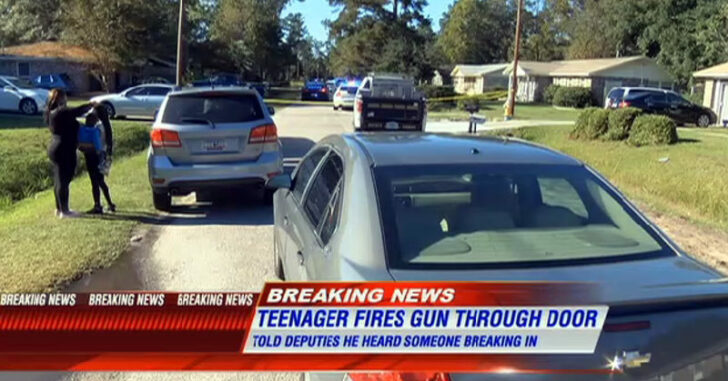 LADSON, SOUTH CAROLINA — A thirteen year old boy reportedly shot and killed an armed burglar trying to break in through the back.  According to reports filtering in and reported through WECT 6, deputies arrived on the scene to find a boy shaken after exchanging gunfire with the armed burglar.  The intruder fled after a brief exchange of gunfire and got into a gray sedan.  His partner, the driver, reported that the car had been shot at while traveling the interstate.  By the time authorities arrived to investigate, they found the burglar had succumbed to his injuries and died shortly thereafter.

The boy told authorities he feared for his life when he saw a man attempting to gain entry to the home.  He got his mother’s Colt .45 and put some well placed shots in the intruder.  The intruder attempted to return fire but ultimately fled the scene in critical condition.

“He saw a subject out back trying to get inside so he fired his mother’s gun through the door and the subject reportedly fired back,” Charleston County Sheriff’s Office officials said.

When deputies arrived, the boy came out without incident.  Neighbors corroborated the scene with accounts of gunfire and the man escaping in a gray car.

This was an attack in broad daylight.  It could have likely ended in tragedy had the armed burglar gained entry and the teenager had been home alone.  This is a great example of children raised to understand the role of firearms and using them correctly.  We can’t all anticipate the conditions that any of our family members will be faced with in an armed home invasion.  It’s a moment to be thankful the boy was able to handle it as well as he did.

The neighborhood where the attempted robbery took place isn’t known as a “high crime” area.  This is an important aspect.  “High crime” doesn’t mean anything.  Crime can happen anywhere.  And with criminals getting more desperate by the day, it only makes sense to prepare for the worst and hope to never need to use it.