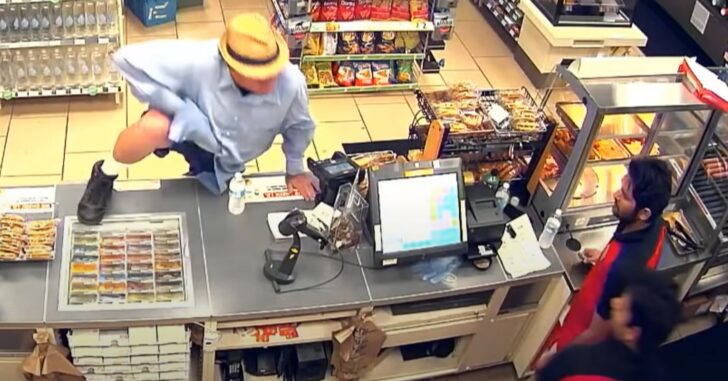 LOS ANGELES, CALIFORNIA — A suspect was successful with an armed robbery caught on camera, telling the cashiers that he has a gun in the way of “Do you want to get shot?”

Their answer was no, and let the suspect take the money from the register. Another camera angle shows the robber’s weapon is actually a Slim Jim.

If one of the cashers had been armed, would they have been justified in using deadly force against this man? Likely. Considering that the suspect said that the could shoot them, and made gestures suggesting a weapon under his shirt, you could absolutely and reasonably assume that the man is an armed and deadly threat.

On November 11, 2016, around 11:55 p.m., the suspect entered a local convenience store in the 500 block of West El Segundo Boulevard in the city of Los Angeles. The suspect grabbed a bottle of water and proceeded to the front counter. After waiting for multiple customers to leave the store, he simulated a handgun and ordered employees to take money out of the cash register and place it on the counter. He then jumped over the counter and removed around $300 dollars of US currency from the cash register. Suspect then fled the location on foot.