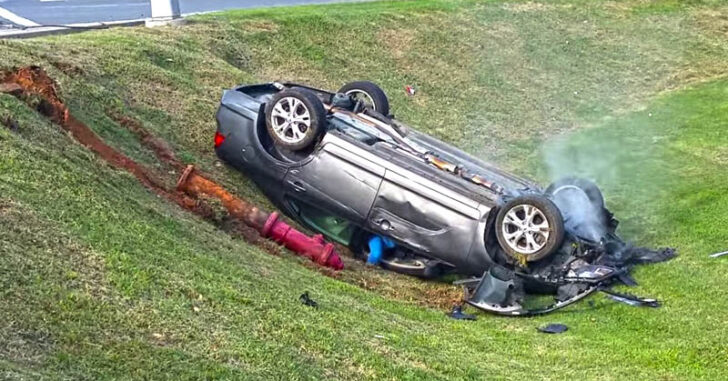 In this video, released via Ebaum’s World, a female driver is pulled over by a police officer.  While it’s unknown what she’s saying (or what she’s on), she appears to wave her arm frantically out the window before proceeding to do donuts in the intersection.

The police officer just seems to shake his head and get into his cruiser to pursue when she winds around and smacks into another vehicle.  This culminates in her smacking right into the police cruiser.  Everyone in the intersection does the right thing — get out of the way.

That doesn’t stop her from acting erratic.  At one point, the cameraman is heard yelling, “shoot her ass!  Shoot her before somebody gets killed!”

While it’s unknown exactly how — she ends up flipped over into a ditch.

There’s plenty of spectators, law enforcement are present on the scene, and now there’s an overturned car.

What’s a concealed carrier to do?

Law enforcement are already on the scene.  Is she a threat to herself and others?  Absolutely yes.  But there’s no way a pistol is going to bring closure to this any faster than it already ended.

If you see something insane going on — and this woman clearly lost her mind — it’s best to stand back and get others to get back.  The best thing you can do to help the situation is let her wind down until law enforcement can grab her up.  That’s why they get paid the big bucks*.

*Sarcasm — Nobody gets paid enough to deal with crazy.

So, responsibly letting the situation wind to a conclusion is a very safe bet in cases like this.  We reported on other situations where a concealed carrier did engage two women in a vehicle when they appeared about to run over a woman in a parking lot.  That’s a bit different.  Those women, however dumb, were not insane.  And he engaged the vehicle — not the women.

A pistol will not stop a vehicle.  A well placed shot to the driver will stop the vehicle — but at what cost?

Our life goals, as concealed carriers, shouldn’t be to take someone out.  It should be to defend ourselves.  A pistol or revolver is just a tool to do that when everything else fails.

The best thing you can do if you see crazy break out is to get yourself, your family, and whomever else will listen the heck back from the scene until law enforcement can settle it.  If crazy won’t listen to reason and continues to advance — like in a case we reported on earlier — then you’re free to defend your life.  That’s your call.

As cliché as it sounds, always give life a chance.

Previous article: [VIDEO] The Most Comfortable Way To Carry A Concealed Firearm Next article: Whoa, Hold Up! What Do You MEAN Guns Save Lives In California?!