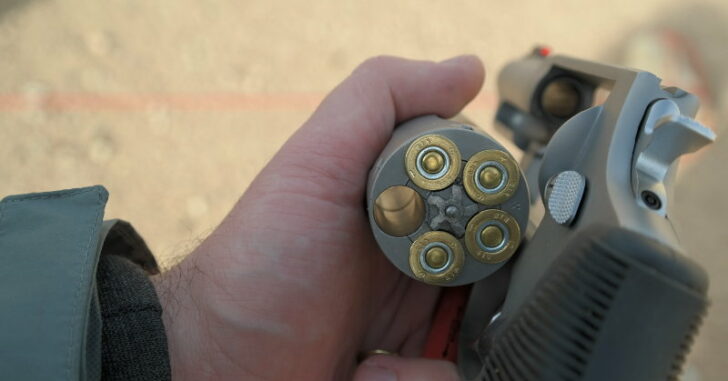 There’s three basic varieties of speed reloading options for revolvers: speed strips, full-moon and half-moon clips, and regular speed loaders.  Regular speed loaders are usually designed for a specific class of revolvers and are designed to quickly reload the entire cylinder all at once.  Full-moon clips reload the entire cylinder and are often meant to be kept in the revolver for quick changing.  Half-moon speed loaders are designed in the same spirit as full-moon clips but only hold half a cylinder’s worth of ammunition.  Speed strips are just clips of ammunition designed to be fed one or two at a time.

Make sure to weigh in with what you use for your concealed carry revolvers, but we’re going to list the arguments we’ve found for and against each. All out?  All in.  It’s that simple with a well-designed speed loader.  In a typical five-round .38 special Smith & Wesson or Ruger, a speed loader can cut down on the fumble and rush of trying to reload a revolver.  Unlike pistols where a person can just eject a magazine and insert a new one, revolvers typically require much more time and precision to reload.  A speed loader with a full compliment of bullets seems like the perfect solution.

Versus ejecting all the rounds out and meticulously hand-feeding rounds back into the cylinder, the concealed carrier can just eject the spent shells and quickly load all cylinders.

We always advise concealed carriers to keep a back-up magazine just in case they need to reload.  With a speed reloader, it’s a pretty close equivalent for those who use a revolver.

For guys or gals who typically don’t have a lot of real estate in their pockets, speed loaders can be a real hassle.  The poorly designed ones tend to jingle if they’re not flush with the rounds and all of them can take up pocket space like no one’s business.

Some companies do make speed loader carriers so that a gun owner can carry one or two pre-loaded speed loaders — but this seems like just one more thing a concealed carrier has to get before he can feel confident walking around with a revolver.

STRIKE 2: One size does not fit all.

Always make sure to find a speed loader that is compatible with your revolver.  A six-round speed loader won’t fit too well in a five-cylinder gun and vice versa.  And, not every speed loader will work with every cylinder. “Did I fire five shots or six?”

Moon clips are thin discs that usually come in the full or half-moon variety.  A full-moon clip will be a disc which holds a fresh full cylinder reload for a particular brand of revolver.  Just eject the spent cartridges and pop a fresh moon clip in.

Sometimes we don’t immediately need all six rounds in the first volley.  That doesn’t mean reloading isn’t a good idea.  Good thing they make half-moon speed loaders which just focus on filling half a cylinder at a time.  Easier on pocket real estate (a strike against “full moon” speed loaders and regular speed loaders) but are they as useful?

Moon clips can often be left in when shooting a revolver.  So, ejecting one moon clip brings out all the rounds attached to it and it’s easy to just throw another moon clip full of rounds in.

With speed strips, you can load two rounds at a time.  With “full moon” clips, you can reload an entire cylinder in a go.  What’s the point in only loading half a cylinder at a time?  Especially in the circumstance of uncertainty between firing four to six shots, it may just be practical to do a full reload or just eject the spent shells and go from there.

Replacing only three rounds at a time may yield a degree of uncertainty when reloading a mixture of loaded or spent shells.  This can be rectified by usually letting the spent shells fall out due to their expansion — but there’s the possibility not all the shells will come out on their own accord.

Worthy of note (but not a strike): Not all revolvers accept moon clips

Depending upon the make and model of the revolver or the moon clip, the revolver may not have gap coverage to accept a moon clip.  Check with your revolver’s manufacturer prior to using moon clips.

POTENTIAL STRIKE-OUT:  The half-moon speed loaders, while being more practical in terms of pocket capacity, may not be any more practical than going between speed strips or a full-moon clips.  Rounds aren’t always committed to the clip and may fall loose in the pocket, leaving you digging around in your pocket or (worse) on the ground.  If you disagree, feel free to educate us in the comments section below. Speed strips are clips loaded with the caliber your revolver is chambered in.  They fit easily in a pocket and allow the concealed carrier to reload two at a time.  This added precision means the concealed carrier can just reload spent rounds or do a full reload on the fly.  Clip manufacturers vary but ultimately, as long as the ammunition matches the cylinder, you’re good to go.

A speed strip set to hold .38 Spc will usually be compatible with most .38 Spc revolvers.

PRO 3: Easier to store than half-moon or full-moon speed loaders.

Speed clips are made from a variety of materials.  The flexible ones are definitely my favorite because there’s no worry about warping the clip.

If you have arthritis or aren’t as agile as you once were, there’s plenty of opportunity to struggle through reloading a revolver with a speed strip.  That’s something the individual concealed carrier will probably decide and is arguably the only strike against we could find for speed strips.

More important than the way in which you reload the revolver is that you practice reloading.  Quickly reloading a revolver requires discipline, attention to detail, and muscle memory.  It’s much easier to load a full magazine than it is to speed reload a revolver.  That said, practice makes perfect.

Whichever you choose — let us know what you think and what you trust.  Concealed carry revolvers are a dependable and accurate solution and we’re always interested in hearing other carriers’ opinions.