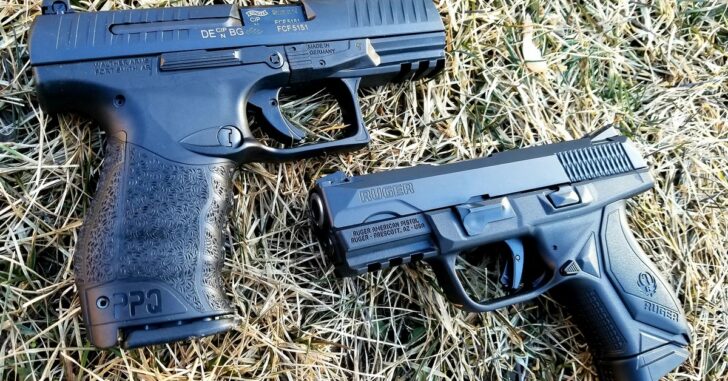 I’ve been running a series the past couple months called, “Handgun Showdown.” Handgun Showdown features two handgun manufacturers that allow the viewers to decide which company produces the best handguns. From the onset of this series, viewers passionately defended or tore apart various manufacturers based on their experiences. This series has been competitive but a lot of fun.

Let’s start with Walther Arms. The Walther PPQ is their flagship handgun model. It’s a compact size, polymer frame pistol with incredible ergonomics along with a short and light trigger pull. The Walther PPQ has been so well received that most of Walther’s handgun lineup is based from the PPQ.

Also featured from Walther is the CCP M2 which is a single stack (eight rounds) gas-delayed blowback pistol which produces a soft shooting experience and the Walther PPQ subcompact. Each of these Walther handguns strike the core of the concealed carry market and in my opinion, each would make a great choice.

As for Ruger, I don’t think there is a company out there that produces the variety of handguns from all sizes and types than Sturm Ruger. Everything from full-size 1911’s to micro .380 ACP pocket pistols, Ruger makes it.

Their vast line of revolvers, semi-autos and 1911 handguns typically has the gun enthusiast’s head spinning.

The first Ruger handgun I featured is the American Compact. I believe the “American” line of Ruger pistols are their best “all-around” handguns they

have ever produced. The ambidextrous controls, crisp trigger and the fit and finish of the American Compact is excellent.

On the budget side of things, the Ruger Security-9 is a quality, compact pistol that sells for around $300. When the Ruger Security-9 hit the market last year, shooters were running to their local gun store. Many people were amazed that Ruger could produce such a nice and quality made handgun for a $300 price tag.

A couple other Ruger handguns featured were the beautiful GP100 Match Champion and the Ruger SR1911. Both of those are chambered in 10mm.

Check out the video and let us know your thoughts and experiences with Walther Arms and Ruger handguns.

Previous article: #DIGTHERIG - Doug and his Springfield XD Mod.2 in a Alien Gear Holster Next article: [VIDEO] Man At Range Shoots Himself While Attempting To Re-Holster