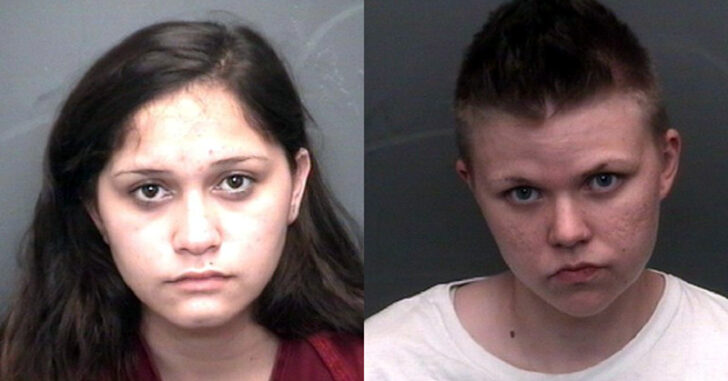 This article has been updated 9/16/2015 to reflect Vanderburgh County Prosecutor’s official opinion on the matter.

EVANSVILLE, INDIANA — Undoubtedly when two 20-year-old girls began their purse-snatching campaign in Eastland Mall, they thought it would be a fast and easy operation.  Knock-off some elderly citizens, grab their purses, and get out before anyone knew what was up.  Well, as both girls are currently being held without bond and probably more than a little shook up from the gunfire, let’s go over this complicated story to see what went right and what went wrong in this botched robbery fiasco.

On a Tuesday afternoon, an 82-year-old woman was in hot pursuit of two women who grabbed her purse in the Eastland Mall.  The alleged robbers were none other than Brittany D. Deener and Morgan L. Blair of Boonville, Indiana.  According to the Courier Press, they successfully made it back into their Toyota Camry before a 33-year-old levelled his firearm at the two and told them to stop the vehicle.  The Courier Press confirms there were multiple other bystanders also in pursuit of the purse-snatchers but he certainly was the first to draw his firearm.

The bullets left the chamber precisely when the two women refused to halt and backed up their Camry into a 66-year-old woman who was also in pursuit of them.  According to authorities, the woman also had her purse snatched by them.  Once they struck the woman, the man opened fire.

While police have counted at least five shell casings associated with this shooting, neither thief nor bystander was injured over the course of the shooting.  The two robbers at least had the common sense to surrender and wait for authorities.

When Vanderburgh County deputies arrived, they arrested Deener with the hit-and-run violation in addition to the charges of criminal recklessness, robbery, and theft that Blair was charged with.  The 33-year-old man who opened fire on the two culprits was not immediately charged but authorities say they are still conducting an investigation into the matter.

Okay.  End point: was this a justifiable use of force?

Complicated.  On one hand, at no time was it apparent that either robber was armed or posed a risk to the carrier himself.  However, the robbers had this point crossed a boundary when they struck a 66-year-old woman.  When bystanders rushed into the mix, it quickly became an issue where it was clear if the robbers did not stop — people would be hurt.

As it turns out, though, yes.  Use of force was justified.

Hermann [Vanderburgh County Prosecutor] said he decided not to file charges against 33-year-old David Roberts, of Owensboro, Kentucky, because Roberts appeared to have acted legally under Indiana’s law on using deadly force.

“I think, looking at the witness statements and the video, he is justified in his use of a firearm,” Hermann said. “There aren’t a lot of instances where you are justified in using deadly force.”

One of those exceptions, Hermann said, is to prevent serious bodily injury to oneself or another person.

He said Roberts did not pull his handgun and become involved until one of the alleged victims, a 66-year-old woman, was knocked to the ground and appeared about to be possibly run over.

Ultimately, authorities will ascertain the validity of this use of force.  According to the Courier Press, an undisclosed number of shots went into the vehicle itself but not directly into the driver’s compartment — so it seems like the shooter was attempting to disable the vehicle vice engage the robbers.

This is never something we, as a concealed carry website that advocates responsible use of force, could ultimately vouch for or against.  This is one of those scenarios where a person sees other people clearly in harm’s way and determines a course of action — that course of action’s moral/legal validity will be determined by judicial authorities, not us.

That said, it’s certainly one of the weirder situations to get caught in as a responsible concealed carrier (or open carrier).  Thankfully, no one was hurt by gunfire and no serious injuries sustained by any of the bystanders.  In so much as that is concerned — this situation worked out.