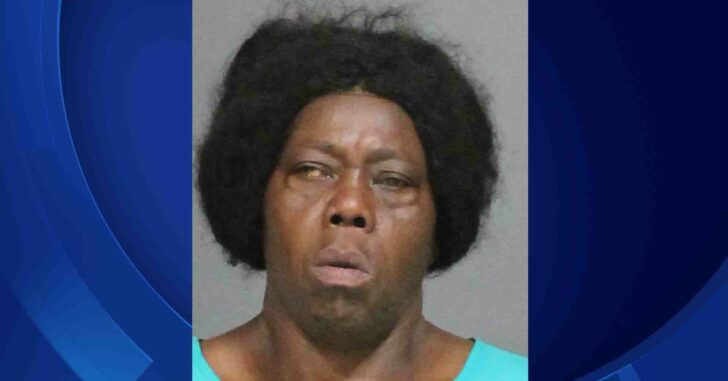 WEST HARTFORD, CONNECTICUT — A mentally deranged middle-aged woman attacked a 27-year-old woman exiting a CVS in West Hartford.  According to witnesses at the scene, Gloria Drummer, 57, had been in the store previously in the evening looking for cigarettes.  Clerks and customers report she had been mumbling to herself and acting incoherent.  Drummer had left the store and was reportedly milling about outside the store when the 27-year-old victim had stepped outside.  Drummer attacked her with a butcher knife — leaving a 1-inch gash down the side of her skull.

According to witness testimony at the scene, Drummer reportedly said, “you lucky I didn’t scalp you” after the victim hit the ground.  Eyewitness News 3 reported that a friend, store employees and other witnesses saw the attack and rushed to the victim’s aid.

“Grew up here 15 years, and never heard of something like that,” Gavin Souza, of Newington, said. “I’m glad they caught her and feel really bad for what happened.”

“First thing is to protect victim and citizens. The suspect obviously has mental disability and we’re in extensive training for all our officers to deal with people with emotional disabilities,” West Hartford Police Lt. Ted Stoneburner said.

After the attack, Drummer allegedly walked across the street to a bus stop and waited there until police arrived.  According to the affidavit, she admitted to what she did and willingly went along with the arresting officers.  She made suicidal statements to an officer and was taken to the UConn Health Center for evaluation.  Drummer faced a judge on Friday morning and was issued a $100,000 surety bond.

The victim was transported to a nearby hospital where she was treated for non-life-threatening wounds.  While the butcher knife that Drummer used penetrated to the skull, it did not present life-threatening or grave wound to the victim.  According to people at the scene, no words were exchanged between Drummer and the victim and Drummer had no apparent motive behind the attack.

Should this have been a defensive gun use (DGU) event?  That’s a question lingering in the 2A community as we’re increasingly dealing with those requiring mental care.  It’s obvious from the report that Drummer was not of a sound mind but the assault with a deadly weapon would feasibly construe the grounds for justifiable use of deadly force.

Thankfully, the victim was quickly rushed to safety by bystanders and a friend.  This is why we always have situational awareness no matter where we go.