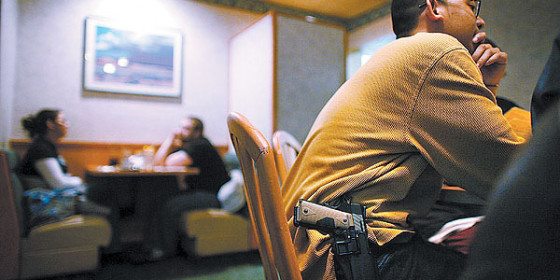 As part of our ‘policy’, we typically don’t cover open carry topics. After all, we are Concealed Nation. The policy wasn’t even a policy until it had to be a policy. Anytime we cover anything relating to open carry, a war plays out in the comments section of the post and article. Just watch. This time will be no different.

I get that some people are only for concealed carry and others swing the other way. Then, you have those who don’t care… just as long as you’re carrying. In the end, it literally doesn’t matter one bit as long as the carrier is being responsible. It’s really that simple.

Let me state that in a different way… just to be clear. I am not against open carry, it’s just simply not for me.

Why I Will Never Open Carry

For starters, it’s not even legal in my current state of residence. But even if it were, I still wouldn’t do it. Here are 5 reasons that I will never, personally, open carry:

If I’m in a store when a bad guy comes in to rob the place, the last thing I’d want is to be seen with a firearm on my hip. Sure you can argue that it may be a deterrent in the first place, but reality shows me that most people are pretty oblivious to things around them. And when you factor in the adrenaline that would be running through the bad guy’s veins during an armed robbery, he or she is likely not not even notice the firearm on my hip.

But still, if I keep it concealed, there’s no way of being spotted.

I’m a pretty laid-back guy and when out and about, I blend in. Depending on where you live, the tolerance level from the general public will vary when they see someone walking around with an openly-carried firearm. For the people who aren’t really used to seeing it or just don’t like it, it’s going to draw attention. Hell, it’s going to draw attention no matter the case. I just don’t like it.

3. I maintain the upper hand while carrying concealed

This is similar to #1, but extends a little further. You want to have the upper hand as long as possible in a stick situation. If SHTF and I need to act, I should –in most cases– maintain the upper hand with my concealed firearm. Literally no one around knows it’s there. If you’re ordered to the ground by an armed bad guy and you comply, all you’ll need is for him to be caught off guard to make your move –if you’re going to make one. If you have a gun on your hip out in the open, you could be making yourself the new target.

Take this scenario: You’re in a bank with your openly carried firearm. Three bad guys come storming into the building and immediately order everyone to the ground. While scanning the crowd, one of them spots your firearm.

Guess who they’re going after first.

4. I don’t like people knowing that I have a firearm

Unless you’re this guy, I assure you that I’m not doing anything I shouldn’t be doing. I’m a law-abiding dude that carries a firearm around with him. Discreetly. Undetected. It’s no one’s business that I have my firearm. Hell, I don’t even like telling the majority of people that I hang out with. The only reason many people know is because of Concealed Nation. It’s kinda tough to run a pro-concealed carry website and not be outed for carrying a firearm.

If no one sees it while I’m out and about, literally everyone is happy and moves on with their lives.

5. I don’t want to make myself a target

Just because you carry a firearm does not make you invincible. I mention this with emphasis because some people truly believe that they are invincible as long as they have their firearm with them. They couldn’t be further from the truth.

With a firearm openly carried, you can inadvertently make yourself a target whether you like it or not. If someone around you wants that firearm, they could try and go after it. How’s your reaction time? How’s your holster retention? It’s happened before.

Keep it concealed and unless you’re printing, you’re the only one who knows that you’re carrying a firearm. Period. Done.

And that’s my 2 cents on open carry.