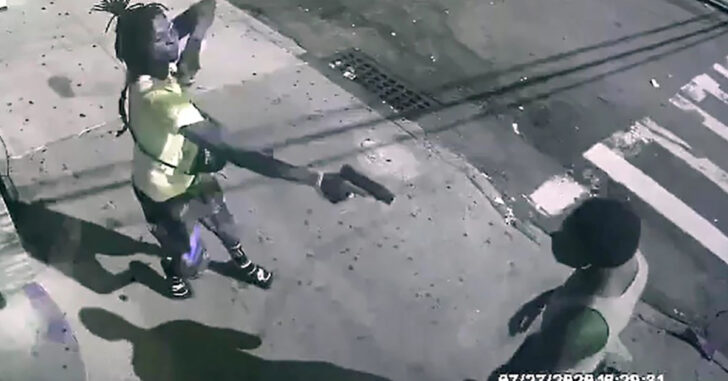 QUEENS, NEW YORK — A former football star for SUNY was shot after he bumped into another person inside a Queens grocery store. That bump was enough to set the other person off, who was carrying a gun.

That gun-carrying felon didn’t seem to care about NYC’s strict gun control laws, nor for the life of the person he shot.

Video shows Capers walking past Thurston, bumping into him along the way. Thurston gets upset and has some words, then punches Capers. A fight kicks off and spills outside onto the sidewalk. This is where Capers was shot.

While this isn’t a defensive gun use, it does show us a reason to be polite. I’m not saying that this incident would have turned out any differently, and I’m not saying that Capers wasn’t initially polite, but we should recognize that strange people with short fuses are out there.

It seems that Capers was apologizing for the bump, and wasn’t looking for a fight.

And further, it’s situations like the one we see in the video above that we carry firearms. Would it have made a difference in this situation? Maybe not, because Thurston presented the firearm rather quickly.

In any event, let’s always be mindful of how we’re interacting with people, maintaining that cool and level head, and training with our carry firearms to make sure we’re as prepared as we can be.

Thurston was arrested less than 48 hours after the incident and faces a slew of charges.

Capers is in the hospital after being shot in the abdomen. He is in critical condition. We hope that he is able to make as full a recovery as possible.