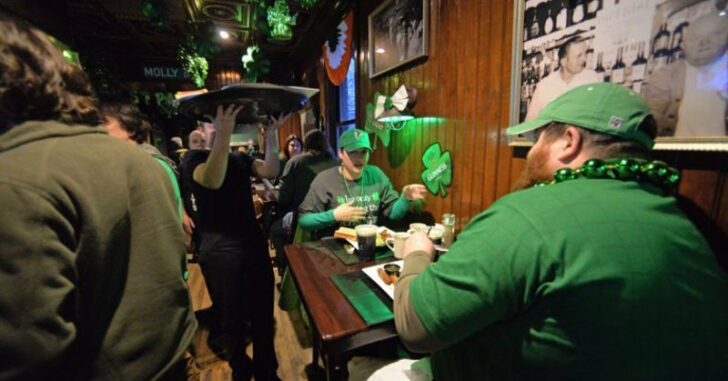 LANCASTER, PENNSYLVANIA — Two young bucks learned a valuable lesson at approximately 2:20 am after one of them drew down on four bar employees.

The bar employees were leaving after closing up when they saw some manner of altercation taking place in the parking lot.  According to Lancaster Online, when they got near to see what the commotion was about, one of the suspects got out and allegedly drew down on one of Molly’s Pub’s employees.  That employee was armed and fired a shot.  Simultaneously, the driver of the vehicle – identified as Santos Maldonado – got out with his firearm drawn.  He was shot twice in the arm and chest.  The first suspect, identified as Garrett Jarrell Wright, ran off after the first shot.

What a pal, eh?  Didn’t even stick around long enough to see if his compatriot got hit.

In either case, police arrived at the scene and it’s still pending whether any charges will be filed against the employee who responded to two armed men.

While this may be initially chalked up as a ‘win’ for concealed carry, it also highlights a lot of the legal risks someone assumes when they investigate what’s happening in other people’s vehicles.

Both employees who were armed have turned over their firearms to local authorities pending the results of the investigation with the Assistant District Attorney.

Moral of the story?  Both thugs hopefully learned that it’s not a safe bet to instantly draw down on anyone approaching.  Hopefully both of the employees get their firearms back.

Previous article: The Well Armed Woman Introduces Industry's First Women's Only Online Gun Forum And Community Next article: Minnesota Says GFY To 4 States In A Move To No Longer Recognize Their Carry Permits, Including Utah