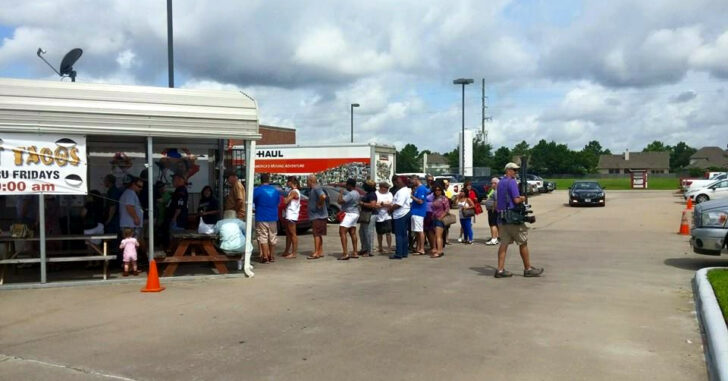 CYPRESS, TEXAS — Those with concealed handgun licenses were in for a treat this past fourth of July when Brooks’ Place offered up a mouth-watering brisket sandwich to everyone with a CHL permit. The main proprietor did it both in celebration of the birth of our nation as well as to support concealed carry in his home state. According to the Brooks’ Place Facebook page – they were sold out by 6pm. And who can blame them? Texas brisket is second to none.

Unsurprisingly, no robberies were reported.

Trent Brooks, owner of Brooks’ Place in Cypress, seemed overly pleased with the turn-out.  He noted on his Facebook page that he was surprised that women outnumbered men in the line.  That should be no surprise!  Recent trends have shown that women are at the forefront of those signing up for concealed carry permits across the nation.

According to KRPC – Houston, if you showed your permit and your firearm, Brooks would even through in a free dessert; a pretty sweet deal for those in the Lone Star state.

We covered previously that with the changes to the Texas gun laws came the provision that allows businesses to post bans on firearms in their establishment.  While Texas requires very specific signage to indicate that, it’s every individual business owner’s right to decline a person’s right to carry his or her firearm into their venue.

That said, Brooks certainly took the bull by its horns in steering hundreds of Texas residents and Fourth of July revellers onto Brooks’ Place’s delicious barbecue.

On Brooks’ Place’s Facebook page, the event was such a success that the owner is considering making it an annual event – posting pictures of the long lines waiting to take advantage of that great sandwich deal. Is this part of a bigger trend of restaurants and business owners looking to attract concealed carriers?  After all, it’s certainly riskier robbing a store full of armed customers than it would be were it a “gun free” zone.