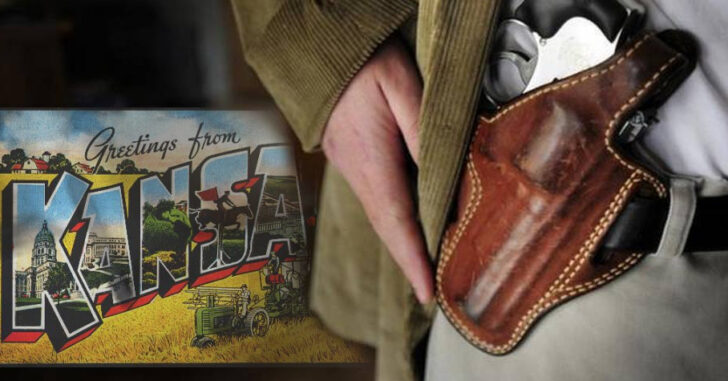 TOPEKA, KANSAS — KMBZ reports that today marks the first day that Kansas’ permitless concealed carry law goes into effect.  All across the state, law abiding gun owners may carry a concealed firearm on their person so long as they obey current Federal and State regulations governing where a concealed carry handgun may be taken.

It’s a great day for constitutional carry advocates whom have long sought to expand the privileges afforded five other states to the rest of the nation.  And July 1st marks the sixth state to join that union.

What a way to bring in the 4th of July, right?

The other constitutional carry states (permitless concealed carry) are:

Maine is notably absent even though they had been originally billeted to go permitless concealed carry on July 1, 2015.  However, their governor has decided to dig his heels in and refuses to sign (or veto).  This happened in both New Hampshire and Maine as a by-product of legislative bodies that were overwhelmingly in favor of permitless concealed carry and governors who were adamantly against it.

It’s rough.  Right now Kansas can be proud it has won an important distinction for its citizens and sets the pace for the rest of the country to hopefully follow.

Mentioned in the original KMBZ article,

[Bill] Basore [Bill Basore at CenterFire Shooting Sports] says he’s glad the law makes it easier for someone to get a gun, but he’s also concerned about the lack of a training requirement.

Some of the discussed points in the constitutional carry debate heavily contend on how people intend to regulate training for these newly minted concealed carriers.  It’s something we’ve brought up in other articles discussing similar topics.  The position of Concealed Nation is that training is always a great idea and in the absence of regulatory statutes requiring it, it’s nonetheless inherent upon the carrier to seek out and get that training.

So, Kansas, celebrate those fireworks with a new found sense of pride that your state supports your constitutional right to carry a firearm on your person.