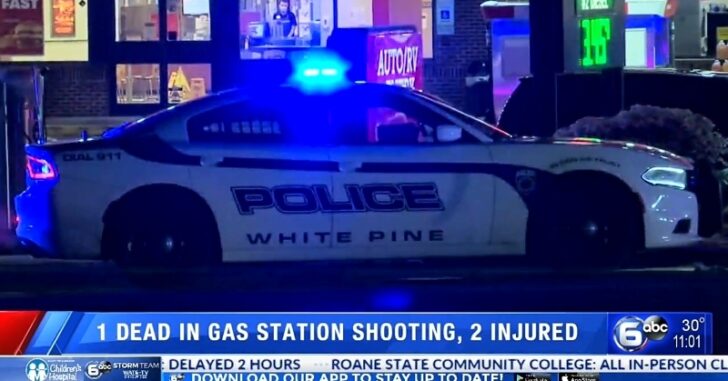 WHITE PINE, TENNESSEE — A shooting left one person dead, and two others injured Monday afternoon at a gas station on Roy Messer Highway. According to Chief Chad Cotter of the White Pine Police Department, the incident occurred around 3:45 p.m. at a Pilot gas station near the Interstate 81 on-ramp.

Police responded to a report of shots fired and arrived to find three people suffering from gunshot wounds. Christopher Ray Welch, 48, was pronounced dead on the scene. The other two victims, a 58-year-old man and a 16-year-old girl, were rushed to a local hospital and are listed in critical condition.

A fourth person was involved but not injured and police believe that the shooting resulted from a domestic situation that “transpired very quickly.” White Pine police are being assisted in the investigation by the Jefferson County Sheriff’s Office and the Tennessee Bureau of Investigation in the on-going investigation into the circumstances that led up to the incident.

The Pilot Company has commented publicly regarding the incident that occurred on their property. Media and Public Relations manager Stephanie Myers provided the following statement:

“The safety and well-being of our Team Members and Guests is always our main concern. As this is an open investigation, we are cooperating fully with local authorities who are looking into the incident at our Pilot Travel Center located at 3663 Roy Messer Highway in White Pine, Tennessee. Any further inquiries should be directed to the proper authorities.”

It is not known if all the victims were targeted by the shooter or if some were innocent bystanders, and authorities have not said whether they are looking for a suspect. The fact that this “transpired very quickly” in a high-traffic location in broad daylight on a weekday should remind us all that anything can happen anywhere at anytime and to anyone.