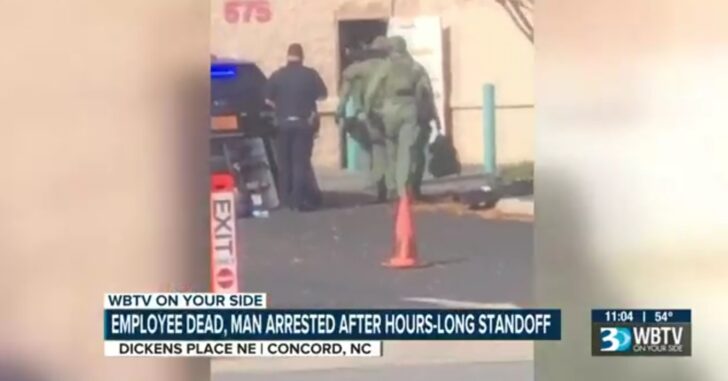 CONCORD, NORTH CAROLINA — An incident that began as a police response to a verbal argument ended over four hours later ended with officers finding the body of an employee who had been fatally shot inside the Concord tire store.

Police say that they were called to the Discount Tire just after 11:00 am, where employees told them that they heard gunshots after a man entered the store. The employees evacuated but told police that one employee did not come out.

After a standoff between the gunman and police, including assistance from the Charlotte-Mecklenburg Police Department SWAT Team, that lasted for hours and included negotiations, officers took the gunman into custody without further incident. After the suspect was removed from the building, officers found the body of 27-year-old employee Terrence Cabilin Wallace of China Grove, North Carolina.

Jeremy Monty Spann, 39, of Lynchburg, South Carolina reportedly entered the shop armed, and has been charged with murder and possession of a firearm by a convicted felon.  There is no known relationship between the two men, according to Concord Deputy Police Chief Jimmy Hughes.

“Right now we don’t know the motivation behind this incident. Hopefully we will be able to determine that if the suspect is cooperating with us.” Hughes then added, “We would like to extend our sympathy for the victim’s family and also the people at Discount Tire’s family who experienced this tragic event today.”

Wallace’s friend, Aly Luna, was saddened by his death, but wants his life remembered. “ The world has lost a beautiful soul and it’s brightest light. Terence was loved by anyone and everyone who ever met him. Always smiling, always laughing.”, she added, “He was the type of young man that we should all aspire for our children to grow up to be.  Nobody deserves to die this way, but him least of all.”

This is a shocking reminder that evil exists and can appear at any time and any place with tragic results.

Previous article: Is Shooting Looters Legal? It Could be in Florida if Governor DeSantis is Successful Next article: One Robbery Victim Complies and Survives, Second (Armed) Victim Resists and is Killed