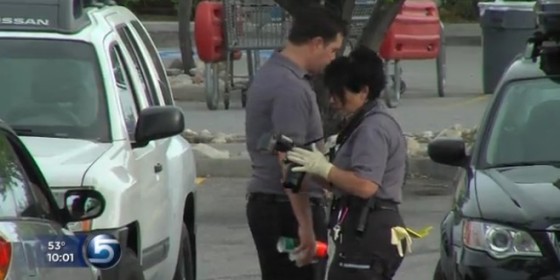 This story has an ending that will make you feel all warm and fuzzy inside. In Salt Lake City, a man went on a stabbing rampage inside a grocery store. He stabbed one person in the side of the head and another in the stomach. There is no word on the conditions of the victims, but police say that their injuries are substantial.

What stopped the attack you ask?

“(The bystander) was suspicious of what might be going on, and when he saw the stabbing, he just drew his pistol and challenged the individual,” which caused the alleged attacker to lie down on the ground, said Salt Lake City Police Lt. Brian Purvis.

Go ahead, I’ll wait until you read that again. Then, when you’re done cheering, I’ll continue on with the rest of the story.

I don’t know if making these points over and over again will do anything to sway the other side, but I think it’s pretty clear that guns save lives when they’re in the right hands.

This next paragraph is for Shannon Watts’ eyes only:

Guns save lives. They really do. This example shows a lawful citizen with a concealed carry permit, who was carrying his firearm inside the store at the time of this attack. Being random, the attacker was extremely unpredictable. The armed citizen, realizing the attack, stepped in and successfully ended the mayhem without firing a single shot.

Lives were saved, and I want to personally thank this citizen for his heroic actions.

Previous article: [VIDEO] This Is Why You Carry At The Grocery Store, Shannon Watts. Next article: Omaha Homeowner Opens Fire on Intruder