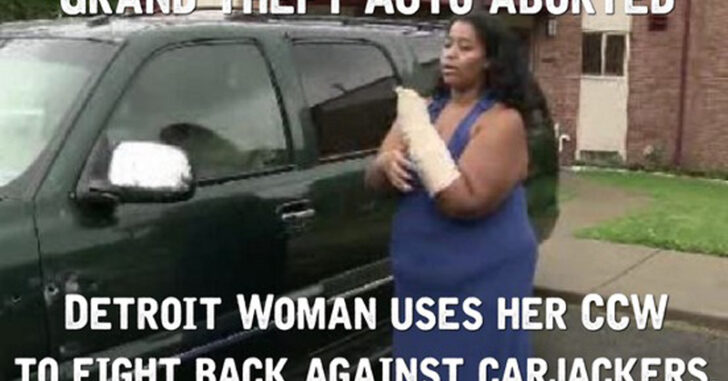 Detroit is no stranger to violent crime.  And a history of hard times mixed with increasingly desperate criminal elements only make matters worse.   That’s why more and more residents are taking matters into their own hands.  Today, that choice was vindicated when carjackers attempted to force a woman from her car at a stop sign.

While making a u-turn, three men approached her car and tried to take it. They went as far opening to the door and shooting at her. There are two bullet holes.

However, the bold thieves learned they were messing with the wrong Detroiter.

“When I see him with the gun as he approached me to take the car, I lifted my gun up on the door and I began to shoot,” said C.C. “So when he shot I was shooting back.”

CCW Raises the Risk of Preying On Vulnerability

Most violent criminals aren’t looking for the hardened target.  A woman in her car, at a stop sign probably seemed like a safe bet.  But these carjackers weren’t simply going to take ‘no’ for an answer.  Not only were they willing to pull the trigger – they did even before she had her weapon out.

On the opposite side of the fence, just two weeks ago a man died of gunshot wounds in Detroit when he was carjacked.

The man, who was not named, was killed during the incident between 2 a.m. and 2:30 a.m. at Gratiot and St. Aubin that began at a gas station, said June West, Detroit police spokeswoman.

When carjackers don’t even wait for the person to exit the car before shooting them – unarmed or not – they’re obviously not worried about sparing someone’s life.  And in this woman’s case the carjackers weren’t concerned — until they had a reason to be.

“All the residents of the city need to come together and take back this city from the thugs and the criminals that have taken over this city, and if you live in fear you’ll never bring this city back,” she said.

C.C. is particularly offended at the notion Detroiters can’t safely buy gasoline at night. Police Chief James Craig, who has applauded citizens for protecting themselves with legal firearms, called getting gas at night a bad idea.

Concealed carry is at the very center of the notion of taking back a city from the grip of violent crime.  When the very fabric of a city is being torn apart by decaying buildings and extremely heinous criminals, there is no waiting for police to arrive.  There’s only survival.  And if you enjoy freedom of movement, the freedom to go out at whatever hour suits you and conduct your business, then concealed carry is a big step in that direction.

CCW Means Being Prepared All the Time

Once that concealed carry pistol goes into the center console or inside the waistband, it’s a full on commitment to situational awareness.  It’s being aware of your surroundings, who’s approaching your vehicle, and acting when the time comes. In this woman’s case, police showed up after the would-be carjackers ran off through lots of abandoned and derelict houses.  Detroit is an easy example of an active urban war zone, but for many others living across the country, they can fall into complacency because their town or city isn’t making headlines.  One of the great things about Detroit is it forces a person to pay close attention.

Because whether it be at a stop light, a bus stop, or a parking lot – when criminals descend like coyotes on sheep, it’s good to be a sheep dog.

Are you prepared to respond to an attempted carjacking?  Tell us about it in the comments section below.