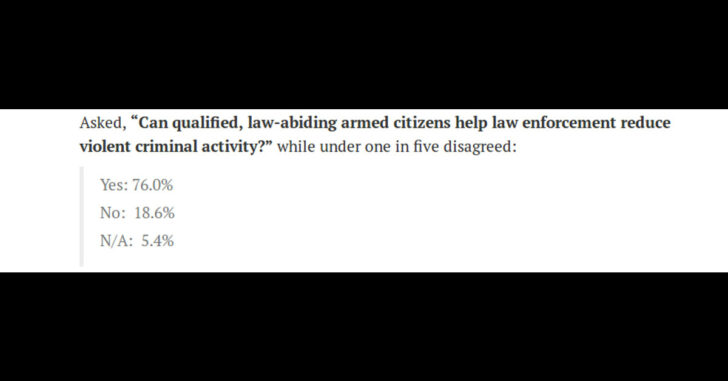 The 28th Annual Survey by the National Association of Chiefs of Police is an event that most concealed carriers would probably never know existed unless they read this sentence. However, it is an important event in terms of letting the community leaders in law enforcement gather and give a voice to concerns with training, readiness, force protection, and better ways to serve their own communities.

This year came with a survey which, in addition to quite a few other questions, asked about the role of citizen gun owners and concealed carriers.

In both of these questions, police chiefs and sheriffs overwhelming responded that they were in favor of both.

It goes with a national trend associated with combating gun violence from criminals. Police and law-abiding citizens both have to deal with this. In one recent situation in Boise, both a homeowner and a police officer came under fire when they attempted to stop a violent rampage from taking place in their neighborhood. The police officer was struck in his vest before the perpetrator took his own life.

In other conflagrations, it’s becoming less and less unusual for concealed carriers and just concerned citizens to step up and fight bad guys.

We’re often on the same side. It only makes sense that police would want us to be capable, willing, and trained in the use of firearms to ensure our own safety.

Listen to this public service announcement given by Sheriff David Clarke of the Milwaukee County Sheriff’s Department. His message pretty much says everything there is to say about the current state of affairs and what we need to do to ensure our own personal safety.

It’s an increasingly rough world out there. But, for the majority of police departments and sheriff’s departments reporting in, the police are on our side.

What can we do to be better prepared?

Whether we want to be or not — we’re in this together. Protecting each other’s lives is no longer a backseat trip. We each need to take the driving wheel in our own individual carry pursuits to ensure our community and our family has a safer place to work and live.

Previous article: #DIGTHERIG - Derrick and his Glock 19 in a Wilder Tactical Shinobi Holster Next article: Attorney Breaks Into Elderly Couple's Home, Throws Plants At Them -- Gets Shot