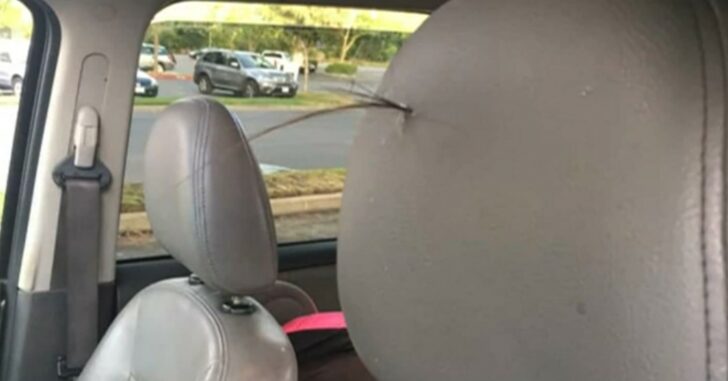 CITRUS HEIGHTS, CALIFORNIA — See that photo above? That’s hair sticking out from the seat. Hair that was removed from the woman driving the vehicle, by a bullet from a gunman shooting at businesses nearby.

Sam Avila and her son Logan were driving Tuesday evening when bullets went flying from a gunman shooting toward a business.

“That’s when I heard, like, pop, pop, pop, and then my windshield exploded,” she said.

Avila parked her vehicle and immediately looked down to see if she was hit. She wasn’t.

“My second reaction was to turn my head and check on my son,” she said. “I didn’t know what I was going to look back at, because he was sitting directly behind me. He ended up being OK.”

Neither was hit, but the mother suffered injuries from the broken glass as the bullet traveled through the windshield.

The suspect, 26-year-old Grayson Schuessler, was shot and killed by police. A motive for his actions was unclear.

However, he was a felon and therefor in illegal possession of the firearm.

Officers said Schuessler shot at officers with a .357 magnum revolver and said he was also in possession of a black airsoft gun that resembled a semi-automatic handgun, as well as over 20 additional rounds for the revolver.

While not a concealed carry story, it’s still relevant to the cause. There are a number of things to point out;

Things to think about.