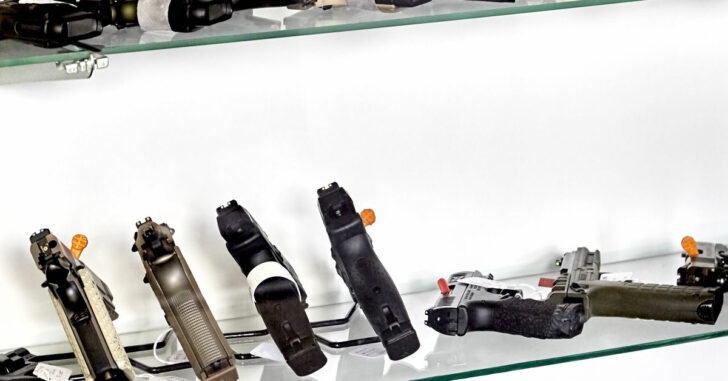 If you’re like me, you opened your gun safe after the holidays and realized somebody’s gotta go. Looking through my pistol and rifle selection, I tried to gauge what I could part with and what was worth the most.

If you’ve ever been stuck in this situation, I’m here with you to try to work through pricing in a used gun or sale.

Depreciation For Guns — “It Makes No Sense”

Cars depreciate value the second they go off the lot. However, if they survive long enough, they become valuable again. However, it takes a very long time before a 1992 Mercedes-Benz becomes worth its original purchase price. You may have to wait 100 years. It may also need to be kept in very decent condition in order to command that price.

A gun is a good. It is something you can hold in your hand and use for a purpose.

An antique can be a good but isn’t used as such.

An antique firearm, such as an original Sig Sauer P210, isn’t typically used as an everyday defensive shooting piece. It’s a collector’s item — something relished and preserved by the owner. The value of an antique firearm is completely separate from its value as a good.

This can get confusing when dealing with a gun that has existed for a long time — such as a CZ-75B. The CZ-75B is both a surplus pistol and a competition pistol. There are multiple markets that seek out CZ-75Bs. The price that a used gun commands seems to be related to the following:

There are traditional ways to gauge a gun’s used value. A lot of gun stores use a book like the Blue Book of Gun Values. A more informal tool is searching for the gun on a gun brokerage website like gunbroker.com or Bud’s Gun Shop.

But how does this play out in the real market?

Last year when I took a handgun to my local Mom & Pop gun shop to use as a trade-in, I looked up the value of a gently used version on gunbroker.com. I knew that the pistol commanded an approximate value of $345.

Hint: It was a used Walther PPS Gen 1.

Come on! I thought to myself. This is a good gun! I love this gun! How can it only be worth $120 for store sale?

Misery loves company, I looked over at the 1911s and the cheapest one I could see was a used Rock Island Armory one for $500. How the hell do 1911s retain their value but this awesome pocket carry pistol doesn’t?

It’s not fair! I screamed in my own head.

I ended up taking the trade — not knowing now what I know.

My Approach To Selling A Used Gun

I’ve developed my own algorithm for selling excess inventory of firearms. I don’t typically sell guns. If I did, I’d get an FFL. On the off chance I am selling a gun, it’s because I need to clear out space for either a new one or just clear out space.

Here is my basic algorithm on how I sell a used gun — based upon the laws in my state.

You can quickly determine if a person is a felon by using an FFL for the transfer. You give the gun to the FFL. The FFL makes the buyer submit to an ATF Form 4473. There’s usually a fee attached and maybe a few hours wait. Problem solved.

That’s pretty much the easiest way to determine if the buyer is a felon.

Any other way, you’re taking a risk. However, evidence of a current concealed carry permit or similar may be a positive sign that other person is considered a responsible party.

Rule #2: Know the laws in your state governing the private transfer of firearms.

Because my state doesn’t regulate the sale or purchase of non-NFA firearms, I’m allowed to sell my guns to people I know. I’m also obligated to not sell my firearms to known felons or people not allowed to possess firearms. Your state might have different rules. Look them up. When in doubt, consult an attorney.

There’s a couple people I know that are always on the look out for that next gun. They’re collectors. If I have a particular gun that I think is a good grab, I’ll let them know. If they’re not interested or doing the teeter-totter, I move it online.

Rule #4: Online Sales Through An FFL

There’s FFLs who will sell your gun on consignment. They take a cut of the proceeds and take care of the interstate transfer issues. If you don’t have an FFL and want to sell your gun across state lines, this is the best approach.

Armslist (and similar sites) link up interested buyers with sellers. You’ll get bombarded by interested parties. Most of them fall off the face of the earth within moments. Quite a few of them will have ridiculous requests (“hey man, could you sell for $3 and a bag of donuts?”). The good thing about it is it can be a local sale. Find a location that makes sense for you to meet up. Think security. Obviously you’re in the market to sell a gun so choose your meetup location wisely.

If you’re at a loss for where to meet, you can check with your local gun shop to see if they will either facilitate the transfer through an FFL or allow you to conduct a private sale in their parking lot.

To date, I think I’ve sold two guns in my life through Armslist. I got the buying price I was looking for and didn’t have any issues with the buyer. Both sales were done through an FFL and the buyer paid the $35 fee.

I did better than I would have done in a trade-in or consignment situation and I still managed to get the cash I was looking for.

Have fun and carry on!