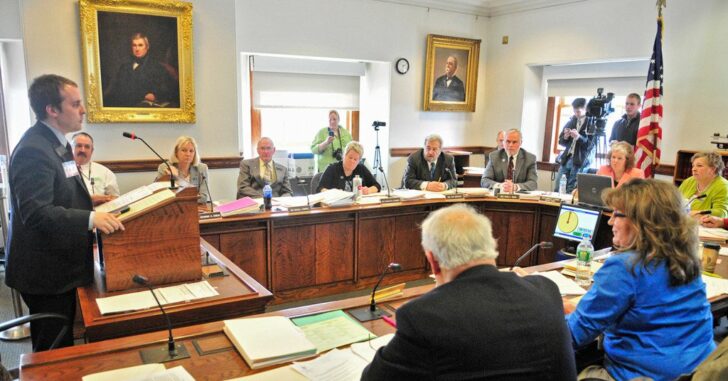 B. A person may not, while in or on a motor vehicle or in or on a trailer or other type of vehicle being hauled by a motor vehicle, have a cocked and armed crossbow or a firearm with a cartridge or shell in the chamber or in an attached magazine, clip or cylinder or a muzzle-loading firearm charged with powder, lead and a primed ignition device or mechanism, except that a person who has a valid Maine permit to carry a concealed weapon is not otherwise prohibited from possessing a firearm may have in or on a motor vehicle or trailer or other type of vehicle a loaded pistol or revolver covered by that permit.

A-1.  A handgun carried by a person who is not otherwise prohibited from carrying a firearm;

How will this bill affect out-of-state residents?  As LD 652 reads, there is no necessity for Resident Permit status in order for this law to go into effect.  That means for residents of neighboring states such as New Hampshire or Massachusetts, they will not be required to demonstrate proof of their own state’s concealed carry permit.

While it is always a great idea to maintain one’s concealed carry permit on his or herself at all times, nothing in the current framework of the law seems to indicate that it is required.

What States Are Also Pushing for Constitutional Carry?

For those unfamiliar, the term “constitutional carry” loosely applies to the unfettered ability for law-abiding citizens of the United States who can legally own guns to be able to move about with those guns without the need for a permit.

While states such as Colorado, Georgia, Indiana, New Hampshire, and others are pushing towards it, there are still plenty of legislative and political hurdles to cross before it becomes a reality.

Maine, it appears, is about to become the sixth constitutional carry state in the Union.

Wait, now, hold up – sixth?  What about Idaho and Montana?

There are quite a few states that have abridged restrictions on permitless concealed carry.  States such as Idaho allow a person to have a concealed carry weapon while engaged in lawful outdoor activities.  Thankfully, Idaho legislature has amended their law to strike that last part but that isn’t expected to go into effect until July, 2015.

Lawmakers supporting the bill argued current law does little to prevent criminals from carrying concealed weapons and that law-abiding gun owners should not be criminalized for hiding a firearm.

“If someone plans to commit a crime with a firearm they have little incentive to seek a permit before committing their crime,” Brakey said.

And while New Hampshire had their version of the Constitutional Carry bill vetoed directly by Governor Maggie Hassan due to alleged concerns from the police union, Maine law enforcement had this to say:

“When we roll into a scene, we’re looking for weapons,” Portland Police Chief Michael Sauschuck said during the news conference, speaking on behalf of the city and the Maine Chiefs of Police Association. He was flanked by chiefs and other police officials from Cumberland County. “Common sense would say, why wouldn’t you have a permitting process before allowing someone to conceal a firearm in the community?” Sauschuck said.

There you have it.  Constitutional Carry takes one step forward to allow people the ability to legally defend themselves, their family, and their property while moving about their daily lives.

What do you think of Constitutional Carry versus the Concealed Carry process?  Do you feel the “Shall Permit” process with most states for CCW is vindicated or do you prefer permitless?  Tell us about it in the comments section below.