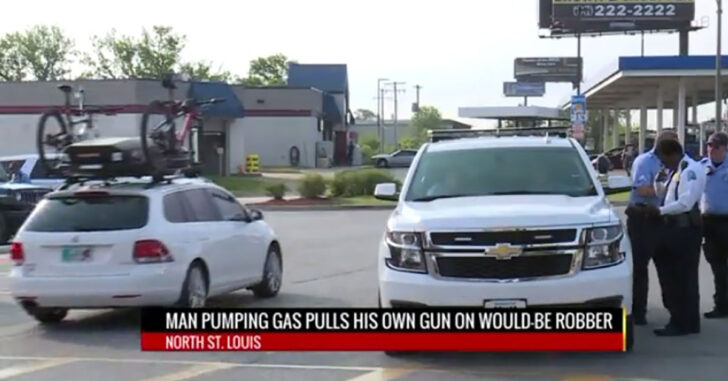 ST LOUIS, MISSOURI — A man with a robbery plan was shot in the rear end after his attempted robbery of an armed citizen at a gas pump didn’t go as planned.

Police say the man was at the Phillips 66 station at 4500 North Broadway about 7 a.m. when a dark-colored car pulled up. A man jumped out of the passenger seat and tried to rob the victim.

But the victim had his own gun and pulled it on the would-be robber, shooting him in the buttocks.

The wounded robber fled to the 6100 block of North Broadway and got medical help, said Leah Freeman, a police department spokeswoman.

I always say it but I’ll say it again: It’s tough for these thugs to remain thug when they go to the doctor after getting shot. Take it like a true thug, amirite?

The man who shot Mr. Wimpythug holds a concealed carry permit, and was obviously prepared for bad things to come his way.

Better yet, police believe that the same suspects are responsible for multiple other armed robberies, including one just a few hours before this failed attempt at Hollywood Casino.

In the robbery at Hollywood Casino about 6 a.m. Wednesday, two men drove into the parking garage in a dark-colored car. One of them approached a man who was leaving the casino and tried to rob him at gunpoint in a parking garage, police say. But the victim in that case had just lost big at the casino.

“They tried to rob him but he was broke. He literally had $2,” Maryland Heights Police Officer Mark Fedak said.

The victim handed the robber the $2. The robber, a bit irked, asked the man for his wallet, and the victim complied, Fedak said.

Congrats guys, a whole $2. But wait, it gets better.

The vehicle being driven by the criminals was carjacked earlier that day. These guys were obviously on a mission and were not going to stop. That is, unless they were met with resistance and in this case, an armed citizen brought their rampage to an end.

Now, it’s up to the legal system. Chances are that, sadly, they’ll be out on the streets in no time.