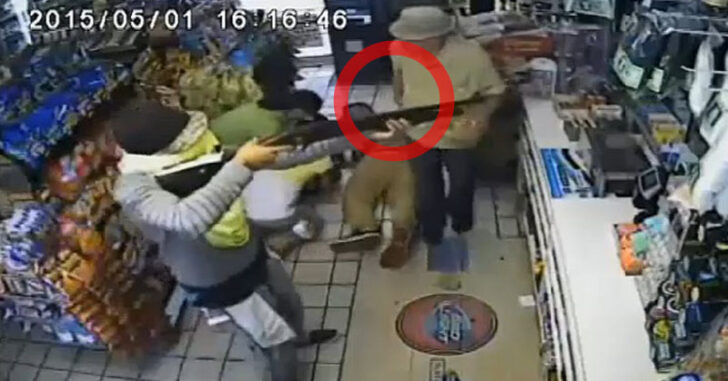 MIAMI, FLORIDA — A customer inside a gas station had a concealed firearm, but made the decision not to draw during an armed robbery.

While we don’t know the identity of the armed customer, my money is on the elderly man in the back. At two points during the surveillance video provided, it seems that he may have been reaching for his firearm and then ultimately making the decision not to draw. In the frame above, as the elderly man is moving back, he reaches for the standard location of an IWB holster. Of course he could have been reaching for his wallet, but it seems to fit the description of the armed customer. Again in this frame, the elderly man reaches towards his back pocket, but then brings his hand back into frame.

I’m no expert, but I think we’ve found our armed customer. Can I fault him for not drawing and engaging the suspect? Absolutely not. It’s a decision that only he could have made at that time and no one else. There won’t always be an opportunity to draw, and hindsight is 20/20.

What would have happened if he did draw? No one will ever know. Still, I thank him for carrying, and thank him for making the difficult decision not to draw, even when faced with a danger such as this.