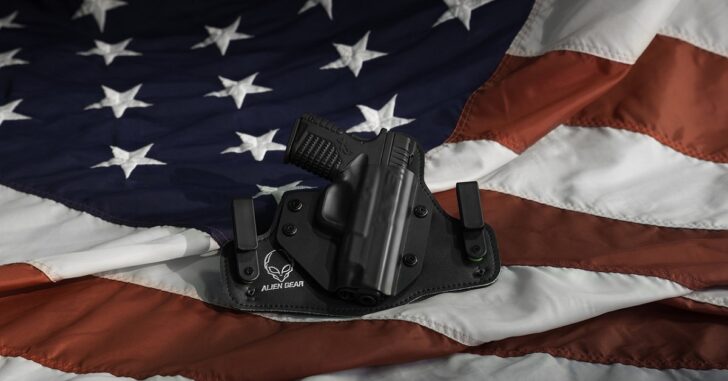 Half of the United States are constitutional carry states, if you count by state rather than by population.

But what is constitutional carry? Is it actually a good thing? We’re going to take a look at these questions below.

What Is Constitutional Carry?

This term can sometimes be interchanged with “permitless carry state,” but the United States Concealed Carry Association makes the argument that the terms are different.

According to them, permitless carry comes with the caveat that “an individual must meet certain qualifications, e.g., no DUIs in the last 10 years, in order to legally carry (Tennessee).”

You’re unlikely to find someone who’s going to make a huge deal of that particular picked nit.

As you might imagine, the concept of constitutional carry is extremely contentious between those who favor conservatism or liberalism when it comes to the reach of the Second Amendment.

Constitutional carry is also one of the very few instances where conservatives have managed to brand a concept or movement correctly.

That trend dates back all the way to when they were termed “anti-Federalists” as though people who didn’t agree with Federalists couldn’t be anything but sticks in the mud.

It doesn’t sound like much, but it’s a big deal.

While we fight battles all the way to the Supreme Court and back to ensure the protection of the right to keep and bear arms for ourselves and our descendants, we have to remember that properly communicating our understanding of our inalienable rights and our good intentions to those who may be undecided on the issue is massively important.

Is Constitutional Carry a Good Thing?

In states where constitutional carry implemented, law-abiding citizens get to do what criminals do every single day: Carry a concealed firearm without having to go through a permitting process.

That process can involve significant financial and temporal cost in classwork and application fees to the government.

It’s hard not to look at an established process that involves paying money to have a government recognize a right you’re already supposed to have and go: “Are you kidding me?”

What’s enormously important to remember, however, is the fact that implemented constitutional carry doesn’t somehow make carriers not liable for responsibilities they may have been informed of in a concealed carry class.

This is the argument we can see against constitutional carry from otherwise gun-loving politicians and citizens.

It does not, however, prevent carriers from being accountable for their locality’s firearms laws.