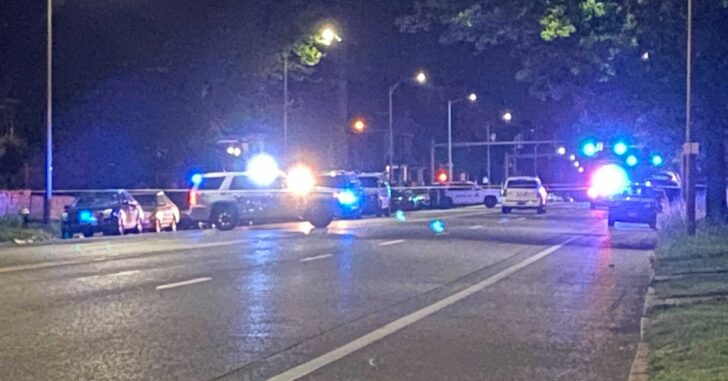 ST LOUIS, MISSOURI — Domestic violence is a scourge that plagues our society like few others. No community is immune to it. In many cases the effects of domestic violence can be felt for years after the incident happened. Furthermore, these events are especially traumatizing to children. What is a child to do when he sees one of his parents beating and nearly killing the other? In this particular case, the child tried to protect his mother, yet ending up making the situation worse.

Officers responded shortly after 1 a.m. to the 5100 block of Page Boulevard, which is in the Academy/Sherman Park neighborhood in the city. Officers arrived to find a 47-year-old woman with a gunshot wound to her torso and a 50-year-old man who had been shot in the area of his legs and buttocks.

The woman told police that she and the man got into an argument that escalated into him strangling her.

While that was happening, she said their 13-year-old son got a gun and fired several shots at his father, hitting him and also inadvertently injuring his mother.

via KSDK 5 On Your Side

Trying to Stop A Murder

The unnamed 13 year old had the best intentions in mind. He was witnessing his mother being killed in front of his eyes. We don’t know if domestic abuse in this household is a regular occurrence; however, on this night it became nearly fatal.

The teen knew the location of a firearm in the house and decided to retrieve it. Hoping that it could stop the attack against his mom, he grabbed it and returned to the ongoing attack. Details are not clear, but we hope the teen at least warned dad before opening fire.

The teen, deciding that shooting dad was the only way to save his mom, opened fire. Unfortunately, it seems as though the teen took a “spray and pray” approach. In the ensuing hail of gunfire, the teen hit both mom and dad. Mom took a round in her torso, while dad got hit in the legs and butt.

Despite the tragedy of a teenager having shot his mom and dad in order to stop domestic violence, gun opponents can use this to push stronger gun laws. One of the biggest pushes in recent years has been laws to keep guns locked up and unloaded in the house. Massachusetts is the only state that requires all guns be secured in a locked safe while in the home. California, Connecticut and New York enforce this requirement in some situations. The District of Columbia also has a policy that requires gun owners to keep firearms unloaded and secured while not being used.

Preventing children from gaining access to firearms in the home is something even proponents of gun rights encourage. It is sound advice to help keep children and family safe from accidents. Most states follow the federal law requirements which doesn’t set standards for gun storage in the home; and this is the right call.

Gun advocates and gun rights groups hammer away at the need to be a responsible gun owner. This includes keeping firearms in a safe location when children are in the home. Responsible gun ownership is an important key to preserving our 2nd Amendment rights. When shootings like this occur, it feeds into the narrative that guns are always dangerous and must be removed from society.

Be a responsible gun owner. Keep your guns out of reach for children in your home, and teach your children how to properly handle a firearm when they are the right age. Teaching them how to shoot and having proper marksmanship are also great ways to avoid these kinds of tragic shootings.

Should you or anyone you know need help with domestic violence, the National Domestic Violence Hotline is available 24/7 and can be reached at 1-800-799-SAFE (7233).