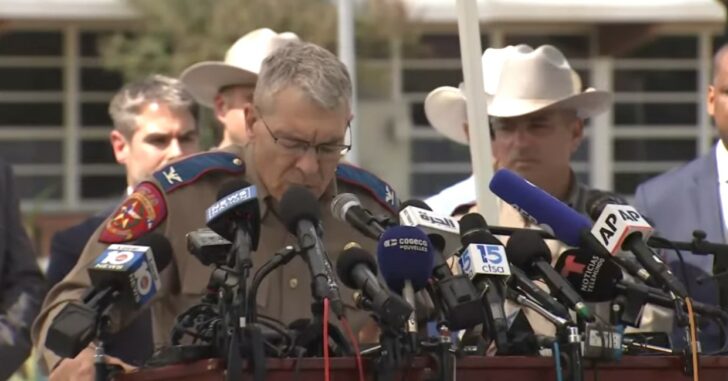 UVALDE, TEXAS — Officials held a press conference today, providing new details about how events unfolded during the mass shooting on May 24th at Robb Elementary, which claimed the lives of 19 children and 2 teachers.

The press conference was shocking, as we learned the commanding officer on-scene made the decision to treat the situation as a barricaded suspect instead of an active shooter. This new information sent reporters yelling for answers, wondering why the decision wasn’t made to breach the school room door for over an hour.

We also learned that 19 officers were inside the school right after the incident began, and that multiple 911 calls came in from people inside the school. A teacher is said to have called 911 to say that 9 children were still alive in the classroom, sparking questions about whether or not the commanding officer was receiving this information as the incident unfolded.

The suspect is said to have had over 50 magazines with him, many of which were left outside the school in a backpack. We learned that when officers finally breached the room, a total of 27 rounds were fired by officers.

Other new details came to light in regards to the timeline. Initially, it was reported that the suspect crashed his vehicle at 11:28 and entered the school at 11:40, leading to questions about what the suspect was doing outside the school for 12 minutes.

A new timeline was established. The suspect crashed his vehicle at 11:28, and entered the school just a few minutes later at 11:33.

There is a lot to unpack from this press conference. You can watch it in it’s entirety below.

Previous article: Officials: Gunman Was Inside Elementary School For 1 Hour Before Being Shot And Killed Next article: We Are Taking A Few Days Off For The First Time In Years