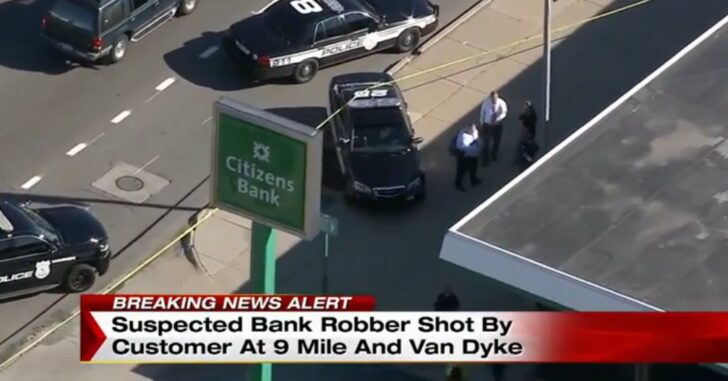 WARREN, MICHIGAN — A quick thinking customer is credited with thwarting an armed bank robbery at a Citizens Bank on Monday.

The bank robber walked into the bank and announced the robbery. The 43-year-old took money from a teller and then pointed his gun at one of the customers.

That customer then drew his concealed carry firearm and shot the robber, striking him in both arms and one leg.

“I live right behind the bank and I just heard all this commotion, and I saw a cop car come flying down, like flying down, my street and slam on his brakes. And I thought maybe there was an accident,” said Bromly Daves. “So I came out and I could see (the person who was shot) from my front porch laying on the ground, screaming. He was laying on his back, holding his leg and screaming his head off.”

The robber was taken to the hospital with non-life threatening injuries.

Our armed citizen is cooperating with police and is not expected to be facing any charges.

Another one for the good guy with a gun.

Previous article: [VIDEO] How Much Truth Is There To Shooting A Lock Off A Door Like You See In The Movies? Next article: Does Your State Acknowledge "Stand Your Ground"?