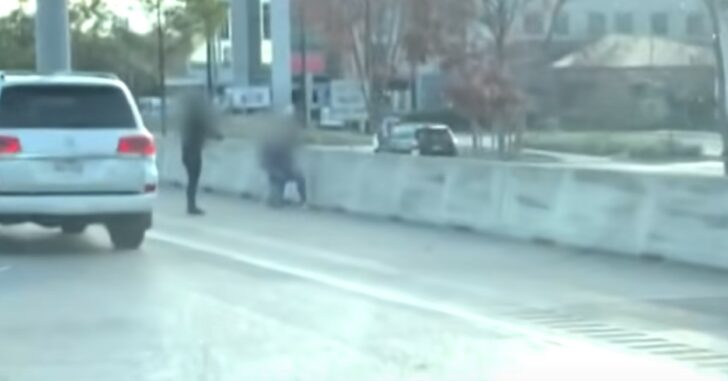 DEDWIG VILLAGE, TEXAS — A road rage robbery ended with the suspect being shot in the head with his own gun after his intended victim fought back. The incident happened Thursday morning on the I-10 freeway in Houston, and police say the suspect first slammed on his breaks and made the car behind him stop, the jumped out. The suspect began yelling at the driver. The witness to that incident took a nearby exit, later re-entering the highway.

Then shortly after, the suspect did the same thing to another vehicle, this time getting the driver out of the vehicle and holding him at gunpoint. The same witness to the previous incident also witnessed this one.

That witness captured part of the incident on cell phone video, including shots fired towards the victim. At some point, a struggle began between the two men. Police say the suspect accidentally shot himself in the head during that struggle.

Miraculously, the suspect is expected to survive his injuries.

The gun used in the incident was stolen from Houston.

If an aggressive driver blocks you in, try to remain inside your vehicle and find a way out. You don’t know what they’re after or what they’re capable of, and the best place to be is far away.

Having a defensive tool is also handy, and one that you’re trained with and extremely familiar. Luckily for this intended victim, the suspect took care of the problem himself.

Previous article: FloridaCarry.org Makes A Move To Help Push Constitutional Carry Into Law Next article: Two Men Lose Their Lives, In Part Because They Carried With Empty Chambers