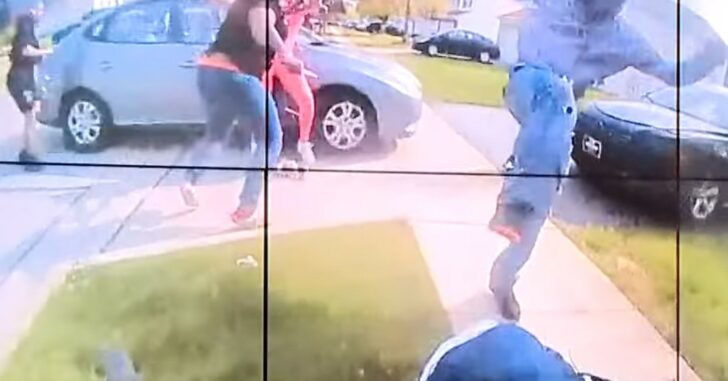 COLUMBUS, OHIO — A 16-year-old girl is dead after being shot by an officer who was responding to a call at the house. The shooting, which was captured on police badge cam, shows the officer fire shots at the girl after he sees her going after another person with a knife.

Police were called about an attempted stabbing.

The truncated video begins at the moment the officer exits his vehicle and then encounters the teen who appears to be armed with a knife chasing a girl outside of a home.

The girl who was being chased falls on the lawn in front of the cop. The officer screams at the alleged stabbing suspect to “get down,” before the teen targets another girl on the hood of a car, the video shows.

As the teen swings the apparent weapon toward the second girl, the officer fires several shots at the alleged suspect, striking her.

After watching the video below, there is no doubt that this officer saved the person’s life who was being attacked. If he had hesitated another second, the story for that person being attacked would likely be much different.

The 16-year-old girl was taken to the hospital but did not survive her injuries.

A man in the video can be heard saying to the officer after the shooting, “She’s a f—ing kid, man.” That same man, seconds earlier, is clearly seen on video kicking what appears to be another young person.

The officer, who has not been identified, was removed from normal duties pending the outcome of the investigation.

The shooting came shortly after the verdict in the Derek Chauvin trial was read, finding him guilty on all charges in the incident that led to George Floyd’s death back in May of 2020.