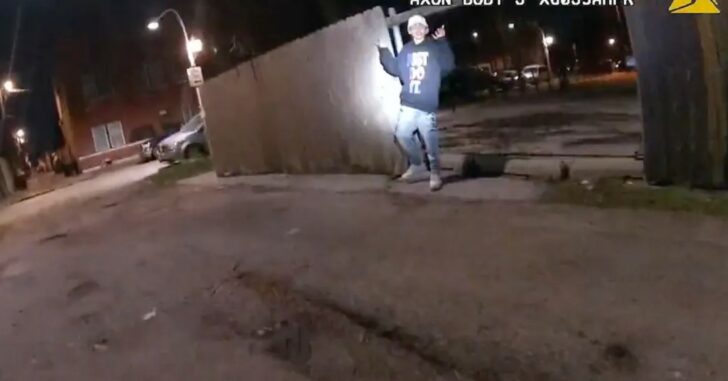 A Chicago police officer fired a shot that killed a 13-year-old named Adam Toledo, after giving chase to the boy after calls of gunfire came into 911. Toledo was apparently with another person, a 21-year-old man, and that person is said to have fired the shots that sparked the calls to police.

Still, it seems that Toledo had a firearm with him, and one of the videos shows him ditch it behind a fence as the officer approaches. With a split second to react, the officer fired.

The single shot hit Toledo in the upper chest, and he was pronounced dead at the scene.

The video shows the officer immediately going to Toledo’s aid, finding the bullet wound and doing what he can to save the boy’s life. Help arrives very quickly and life-saving measures were continued.

The incident occurred in the early morning hours of March 29th 2021.

The officer yells at Toledo to stop and then he is heard saying “Drop it!”, leading to the belief that the officer saw the firearm in his hand.

0.85 seconds was the reaction time.

A more detailed video explanation of events can be viewed below:

An attorney for the family of Toledo said that legal action will be taken against the officer who fired the shot. “If you’re shooting an unarmed child with his arms in the air, it’s an assassination,” she said.

Others disagree, saying that the officer was well within his rights to defend himself under the circumstances.

From where I’m sitting, I’ll side with the officer on this one. Who knows what leads a 13-year-old to have a handgun and run from police, but doing so is knowingly putting yourself in danger. If the officer saw the gun after chasing down a suspect, who was running from an incident involving gun fire, a reasonable person could assume that the suspect would shoot the officer chasing them.