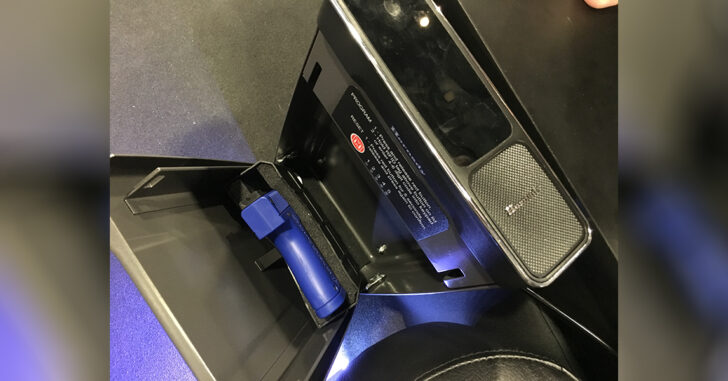 You know Hornady for their ammunition. But you may not know that they also make a range of innovative gun security devices including biometric and RFID-enabled safes. The latest addition to their RAPiD Safe line of RFID accessible gun storage units is the RAPiD Vehicle Safe. The 14 gauge steel safe is secured to your a seat mount by a standard steel cable. It’s mounted to an inflatable — yes, inflatable — backing that slides between a front seat and your car’s center console. Once the unit is in place, you use a blood-pressure like bulb to inflate the backing so it stays firmly between the seat and console without rattling around as you drive. The entire unit is reversible so you can mount it on either the driver or passenger side. If you need to access your gun, you have two options; enter a combination using the RAPiD Safe’s four-position light-up display or waive its small RFID disc over the lower part of the RFID symbol. That’s the RFID disc in the photo above. Probably the best way to keep it accessible is the mount it to the back of your cell phone so it’s always handy when you need it.