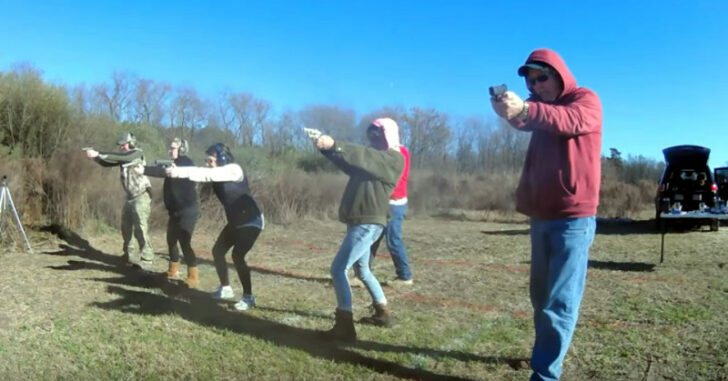 At some point in our lives, we began shooting guns.  Maybe it was an aunt or uncle who took us out skeet shooting when we were kids.  Maybe it was a boyfriend or girlfriend that made that first excuse to the shooting range.  And in some cases, it’s the legitimate fear of being hurt or killed or having to watch one’s family suffer needlessly.

Whatever the reason, we began shooting.  And when we got to an appropriate age, some of became concealed carriers.  Some of us waited a little bit in life before we did it, too.

And now we’re everyday concealed carriers, we can look back on our first times firing handguns and laugh a bit about some of the mistakes we made and — most importantly — what we inevitably had to do in order to correct them.

Easy Mistakes To Spot In A Beginner’s Shooting Posture

1. “Overcompensating” — Leaning Back And Bracing For Impact

When firing a handgun for the first time, we understandably may be taken aback by the recoil of that first bullet.  It’s better to be over-prepared than under-prepared, right?  Well, for first time experimentation, it certainly isn’t the worst way to go about it — but it’s no way to go through life, son.

The problem is when we bend our bodies out of alignment.  It’s almost like a Gung Fu exercise when figuring out a good shooting posture.  Feet placement is important but just as important as the feet is the rest of the body.  If someone can walk up to you and gently push you over from any angle — it’s not a good stance for shooting.

Hips don’t lie, as Shakira once said.  And let us listen to this Colombian goddess for a moment and consider our own hips.  Hips control our center of gravity and while the rest of our bodies can “fake” an attacker, hips can’t.  A light, manageable squat is good because it can allow you to “lean in” to the shot.  It’s better to “lean in” than “lean out” (or back).  You are generally much more exposed to hazard.  Conversely, leaning in without at least lightly squatting your hips will leave you pretty unsupported.

3.  Shrink The Target — Minimize Your Silhouette

There’s a second side to the whole hips issue — minimizing your silhouette.  Unless you’re laying an ambush down on unarmed blind people, you’re going to have someone shooting back at you.  Typically, if you make it to the “exchanging shots” section of the conflict, it’s safe to say your opponent(s) are as intent on killing you.  If you are standing out in the open, you are probably going to want to adopt a posture as close to the ground as humanly possible.  This doesn’t mean squatting your hips as much as it means flat-up hitting the deck.  Short of hitting the deck, at least squat as you move to cover.  Don’t be the tall, delta-sized target wandering across an active shooting scenario.

4. Don’t Get Too Attached To A Particular Posture

In the extremely rare instance you are using a handgun in self-defense, it’s not altogether unimaginable that you won’t have enough time to step into a well practiced posture, line up and place a judiciously placed round in your attacker.  IF you do — great!  The point is, don’t get attached to any one particular stance or position.  Obviously, the simpler and more practiced postures are preferable but cover and concealment are definitely a number one priority when escape is out of the question.

A beginner’s mistake will be to take the gun too casually.  Versus the extreme of “overcompensating” is the concept of severely “undercompensating”.  Even if it’s a .22LR handgun, treat it with respect but obviously take control of the darn thing.  If you’re picking up a Desert Eagle for the first time, put your hands on the grip and support it.  Hold your body in a way so the recoil is absorbed and passed through rather than transferred as kinetic energy all helter skelter.

Are there any things about your posture you look back up and laugh about?  What worked for you in terms of learning a posture well suited for your style?  Tell us about it in the comments section below.