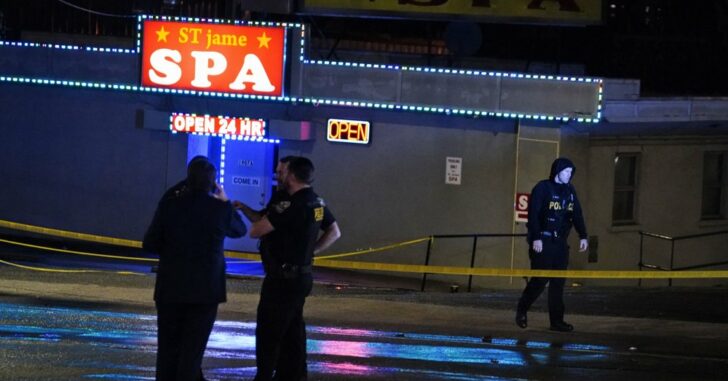 ATLANTA, GEORGIA – On Tuesday evening, a gunman carried out attacks at three spas in the greater Atlanta area, leaving eight people dead and one injured. The spas, also commonly referred to as massage parlors, were reportedly owned and staffed by Asians.

Th incident was widely referred to by media outlets as a mass shooting due to the fact that four or more persons were shot at the same general time and location. Politicians and media outlets were quick to assume that the series of crimes perpetrated by the white male suspect were racially motivated; however, based on the suspect’s own confession, it appears that they may have been wrong.

The suspect, 21, told investigators that the attacks were not specifically motivated by the race or gender of the victims, but rather by his own struggles with what he described as a “sex addiction”. The suspect apparently viewed the businesses, and the activities that he associated with them, as sources of personal temptation that he needed to rid himself of.

According to a statement by Cherokee County Sheriff’s spokesman Captain Jay Baker, “He apparently has an issue, what he considers a sex addiction, and sees these locations as something that allows him to go to these places, and it’s a temptation for him that he wanted to eliminate.”

It began on Tuesday evening at Youngs Asian Massage Parlor in Woodstock, about 30 miles north of Atlanta. Five people inside were shot, technically classifying it as a mass shooting, with two dying at the scene and two dying at the hospital.

About an hour later Atlanta police responded to a reported robbery and found three people dead from apparent gunshot wounds at Gold Spa. APD then received another call of shots fired across the street from Gold Spa and found another deceased victim inside Aromatherapy Spa. The close geographical location of the crime scenes also technically qualify the incidents as a mass shooting. Both businesses are located in an upscale area of Atlanta, albeit in a small pocket that is home to numerous strip clubs, massage and tattoo parlors.

Of the eight killed, seven were females and six were Asian, according to authorities. The names of the dead have not been released as authorities work to positively identify them.

Following the incidents, the suspect was believed to be headed south out of the Atlanta area. His vehicle was spotted by a Georgia State Patrol trooper on I-75 south, approximately 150 miles south of Atlanta. A PIT maneuver executed by troopers near mile marker 93, just south of Cordele, was successful in stopping the vehicle.  The suspect was taken into custody without incident.  He was taken to the Crisp County Jail, and officers from the Cherokee County Sheriff’s Office and the FBI were expected to transport him back to Cherokee County sometime Wednesday.

Atlanta Mayor Keisha Lance Bottoms declined to answer a reporter’s question of whether sexual encounters were available at the businesses, saying that she did not want “to get into victim blaming, victim shaming here.”  Bottoms added that regardless of the motive, “It is unacceptable, it is hateful, and it has to stop.”

Georgia State Representative Bee Nguyen stated that the crimes appear to be at the “intersection of gender-based violence, misogyny and xenophobia.”

Vice-President Kamala Harris commented, “We’re not yet clear about the motive. But I do want to say to our Asian American community that we stand with you and understand how this has frightened and shocked and outraged all people.”

President Biden’s press secretary, Jen Psaki, said that the President had been briefed on the “horrific shootings” and would receive more information on Wednesday from FBI Director Christopher Wray and Attorney General Merrick Garland, who was sworn in just five days before the shootings.

Nico Straughan, one of the suspect’s school classmates said, “He went from one of the nicest kids I ever knew in high school to being on the news yesterday.” He described the suspect as “super nice, super Christian, very quiet”, saying that he would walk around at school every day carrying a Bible.

Previous article: BREAKING: Suspect In Custody After Mass Shooting At Three Spa Locations, 8 Dead Next article: Armed Group Runs Up On Armed Man Who Isn't Planning To Be A Victim