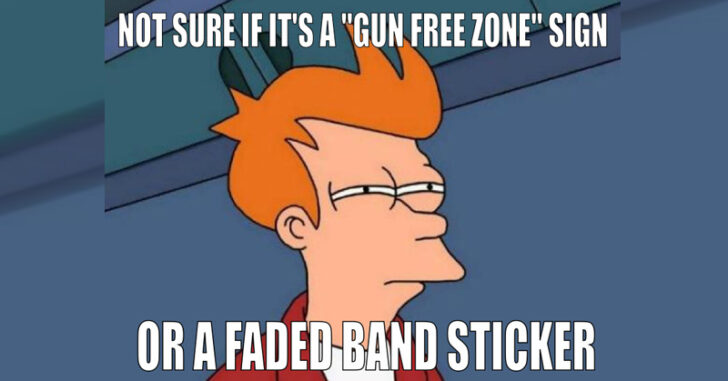 Ever walk up towards a building and see a faded sticker in the corner of the doorway?  As a concealed carrier, it’s always a momentary pause as we try to figure out at a distance whether the premise we’re entering into is a “gun free zone”.  We all know “gun free zones” are a unicorn pooping rainbows sort of myth but almost none of us are eager to have to talk our way through getting spotted.

“How do you know where not to carry or do you just look for signs?”

We get this question a lot and figured it was time to give it its own article.  It’s certainly not a bad question.  For concealed carriers that had to go through mandatory training for their application process, there was likely a lengthy section devoted to your state’s laws on where you can and cannot legally carry your concealed handgun.

Each state is going to differ on the following:

Some states allow you to carry into church.  Louisiana, for instance, requires some special training certificate in addition to a concealed carry permit.  Other states leave it up to the pastor or owner of the church to decide whether or not concealed carry is allowed.  Michigan is an example of a state that does not allow concealed carry in churches or places of worship (unless allowed by their administrators).

Florida explicitly does not allow a person to carry concealed in the public, unsecured areas of an airport.  Nevada, however, you can.  Because it’s hard to know what the rules will be, it’s best to check with the state law of the destination airport.

Federal law dictates that state-run elementary and secondary education facilities are protected by federal law when it comes to a “gun free” designation.  The state, however, has the option to impose additional measures.  Those measures, like in Michigan, stipulate who can and cannot carry onto school grounds and what the rules are for that.  In Michigan, if you’re licensed to carry a concealed firearm or have special permissions/exceptions, you’re allowed to enter into a school zone with a firearm.

That’s not the same everywhere you go.  Maryland has much stricter rules governing firearms around schools.  That’s both ironic and sad considering the crime rates around those schools don’t seem to be affected too heavily.

When it comes to a state-funded school, like Ohio State University or whatnot, the state has the first claim on whether or not they acknowledge an individual’s right to carry a concealed firearm on campus property.  Ohio is a funny example because Ohio is one of the few states where carrying concealed on campus is illegal unless you’re moving it to a secure container in a vehicle.

In some states, it’s illegal to carry a concealed firearm into a police station.  The same exists for the City of Madison, Wisconsin, and similarly stated by the Michigan State Police.  This may not be true for all places, but police stations are usually upfront with the rules governing carrying concealed firearms into them.

Kentucky citizens are currently embattled for the right to carry concealed into the KFC Yum! stadium.  According to their state law, publicly funded arenas and stadiums are not allowed to restrict concealed carry.  The NFL and MLB are still contesting it every which way they can.  Texas is another example.  While some states will explicitly allow it, bad business practice may seek to prohibit it.  Viewer discretion is advised.

For major metropolitan cities, concealed carry permits do not necessarily extend into city hall.  That’s not true in Texas and it’s certainly not true in places like Iowa.  That said, if unsure — check.  As a rule of thumb, the state police website for almost any state in the union will have at least some section assigned to concealed carry FAQs and/or limitations.  When in doubt, shoot them over an email with the question.  At a minimum, they’ll usually respond with the specific law or a simplified response.

This is a general list of places which are very explicit in their procedures to carry a firearm onto their premises.  If you’re in doubt or disagree, it is always recommended that you check with the facility first before entering onto their premises with a loaded firearm.

There are procedures for most of these places but they generally all require some very explicit protocols prior.  And getting busted carrying a concealed firearm onto a Federally protected “gun free zone” carries with it Federal charges.

We’ve come up with a basic process.  Please note that in the case of privately owned property, it is at their discretion to knowingly allow you onto their premises with a concealed carry handgun.  Some states may even require that you notify a homeowner if you are carrying.  Do your research. When in doubt, check for signs at doorways and entrances.  Anyone adamant about you not carrying your concealed handgun will post signs.  If you catch the sign, note what law backs it up.

If the law backing up that sign is valid, legally you’re obligated to obey.  Otherwise, if there is a special permission that may be obtained whereby you can carry on the premises, you can choose to seek that out.

As always, the lower the profile you keep, the easier it will be for you to carry concealed.