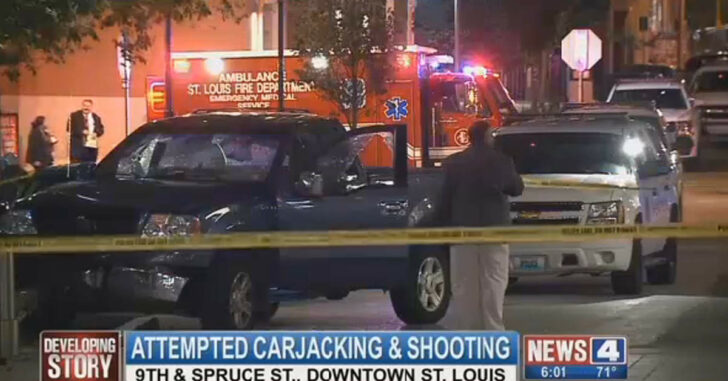 ST. LOUIS, MISSOURI — Stepping out of the Flying Saucer restaurant near the Busch Stadium, a 27-year-old was confronted by a 20-year-old as he went to get into his pickup truck. The 20-year-old announced that a robbery was in progress, unknowingly making himself Public Enemy #1 in the mind of his victim.

St. Louis police describe the accomplice as another 27-year-old man and his co-pilot as a 21-year-old woman. The gunowner then took the correct action and fled to a nearby shop and notified police. The criminals got their guy out and took him to a hospital where he was taken in for custody and treated for a gunshot wound to the leg. The driver who allegedly opened fire on the victim was also taken into custody at the same hospital but the woman managed to flee. Police are still looking for her.

KMOV reports that the case has been taken over by the homicide section of the St. Louis police and they are investigating the shooting by the accomplice as an attempted homicide. This case is still under investigation and it may be awhile before the final details emerge.

One thing we can say: nobody expects the Spanish Inquisition.

Tongue-in-cheek, for sure, but quite simply, if we’re not prepared to defend our life and our property, we can’t honestly expect criminals to do the same.

It’s not like some young robber with something to prove to his thug friends is going to be like, “oh, so you forgot your gun? How convenient. Look, I’ll give you a pass this evening but if you can come by here 8 pm tomorrow night — and be ready this time — we can make this happen.”

That’s not how it works.

Carry everyday and carry on your person. In almost every single state in the Union, a concealed carry permit can be obtained for a reasonable amount of money and maybe a mandatory class. It’s that silly slip of paper and remembering to carry your handgun that enables you to respond to these threats to your person and your property.

This guy did it right — respond to the threat, neutralize or stop your attackers, flee for safety, contact authorities, and shelter-in-place.